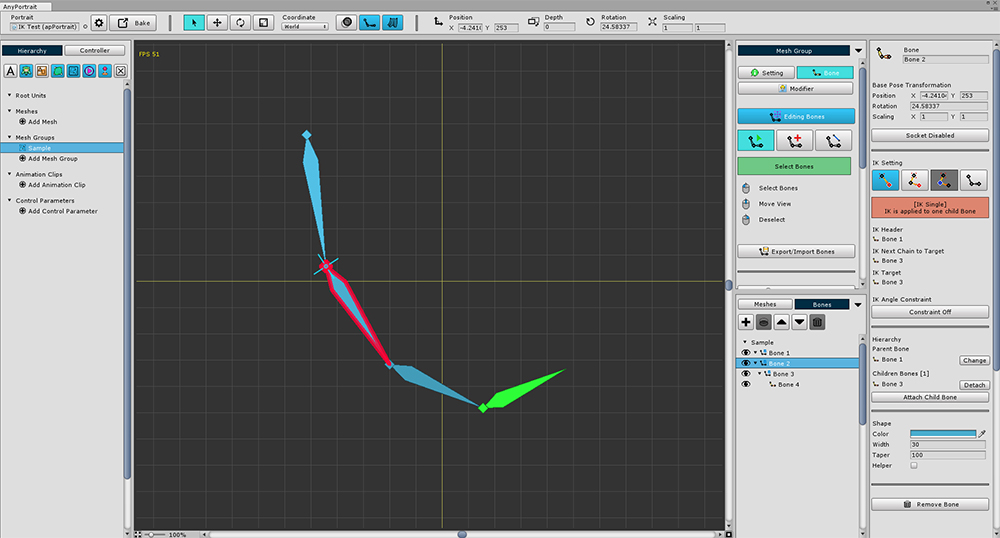 When controlling the bones, basically you control by rotating the bones.
Sometimes, on the other hand, the user moves one bone and the other is automatically rotated.
This method is called IK (Inverse Kinematics).
IK allows intuitive control.
AnyPortrait provides both (1) IK control functions for editor editing and (2) IK functions that can be called from the game.
This page describes the settings for using IK and how to use it in the editor.
Bones with IK enabled Scripts used in this game can be found on the related page.


When you deal with this IK setting professionally, you need a lot of options and it can be difficult.
To make IK fast and easy, AnyPortrait provides "IK Chain" and "IK Mode" methods.

Concept illustration of IK chain.
The IK chain consists of Head, Chain, and Target.
IK is calculated from the position of the Target bone with the Head bone as the starting point. 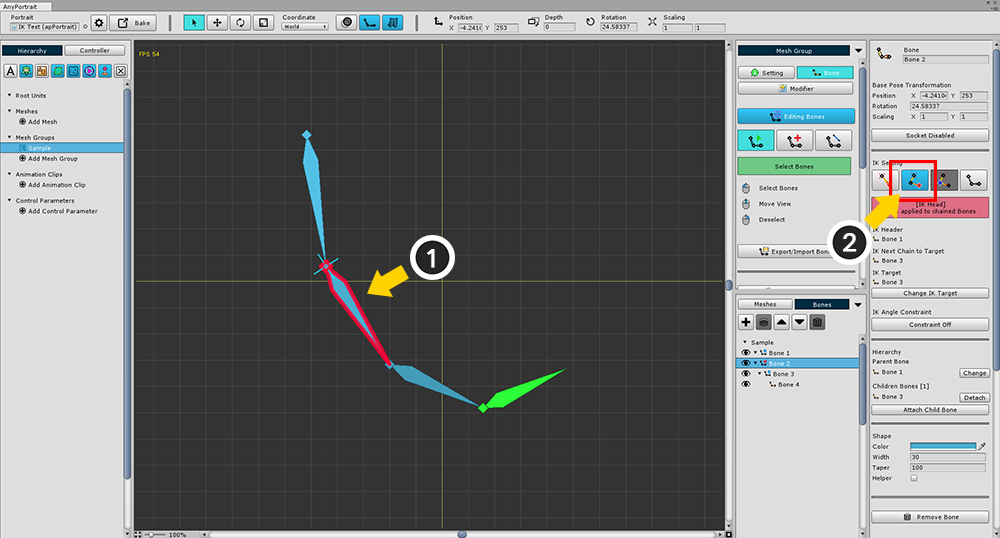 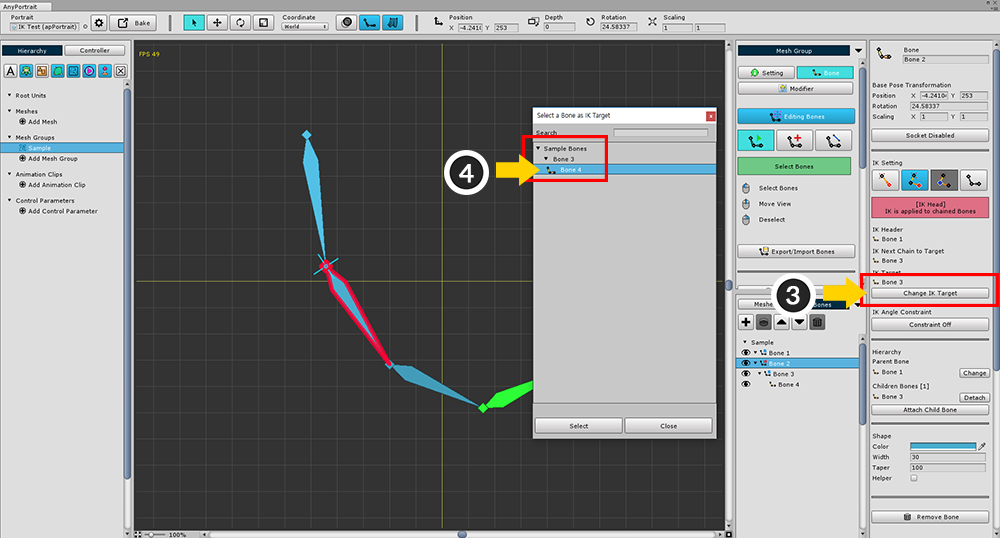 (3) Press the Change IK Target button to (4) select the child to be targeted. 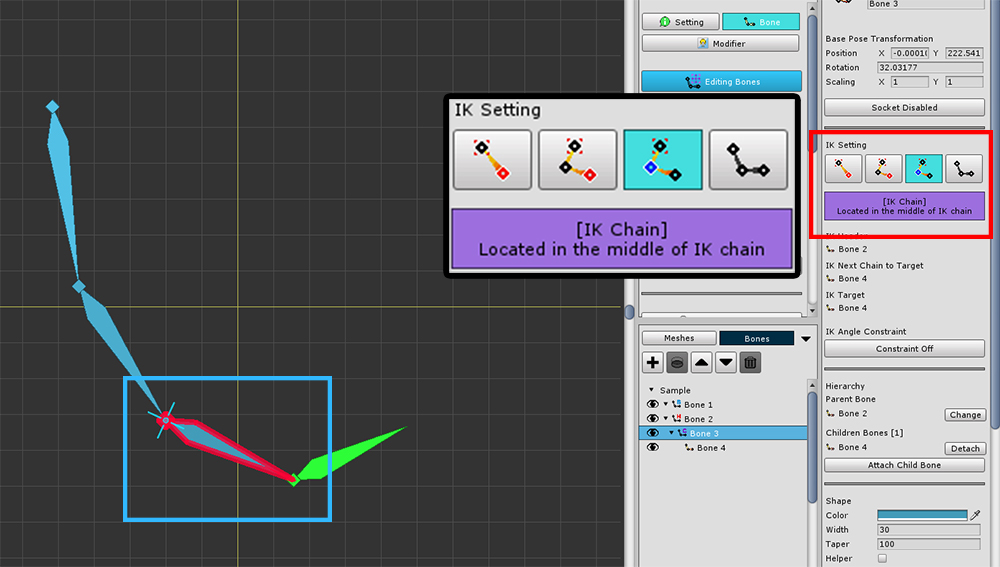 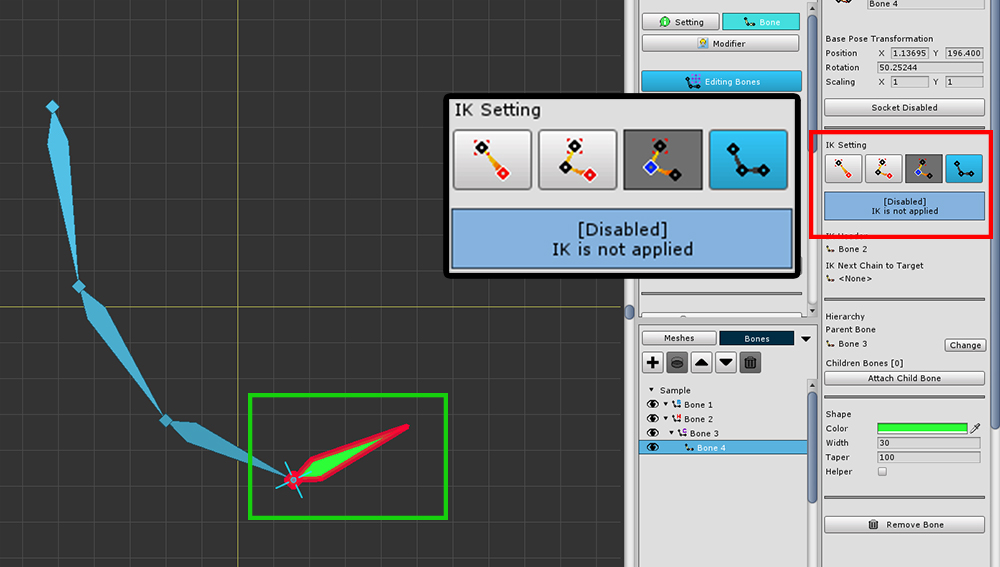 When the IK chain is created, the middle bones are automatically changed to Chain mode.
The target bone is not affected by the IK chain itself.
(Currently, there is no child bone, which is Disabled mode, but you can also configure a new IK chain.) 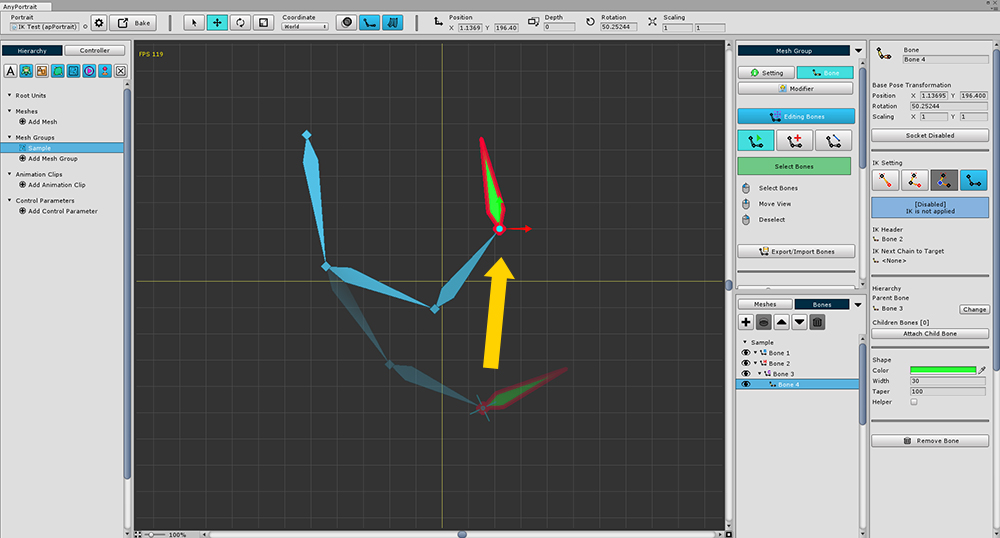 With the IK chain in place, you can see that the bones in the chain rotate automatically as you move the bone.
(You can also check in bone editing, modifiers, and animations.) 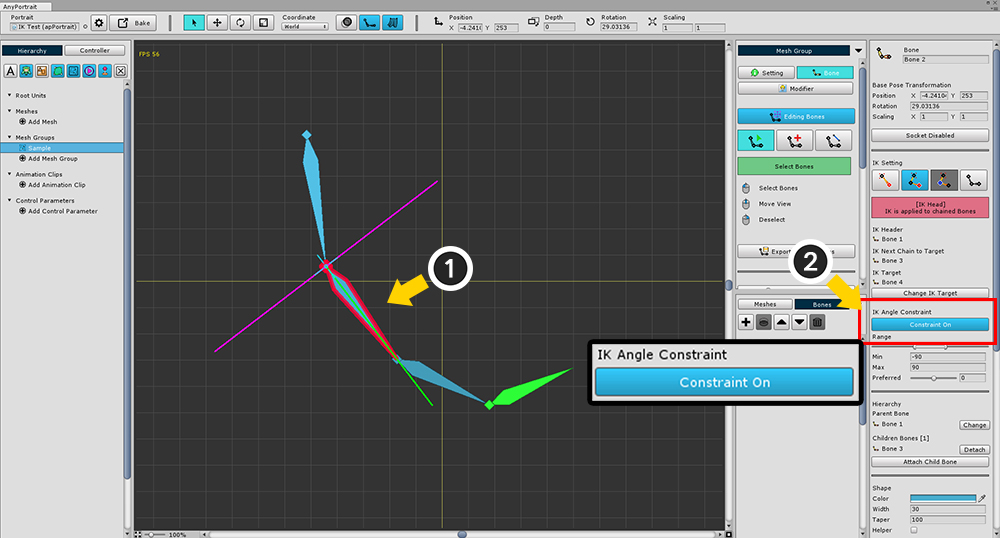 IK calculation, you may want to limit the angle depending on the joint. 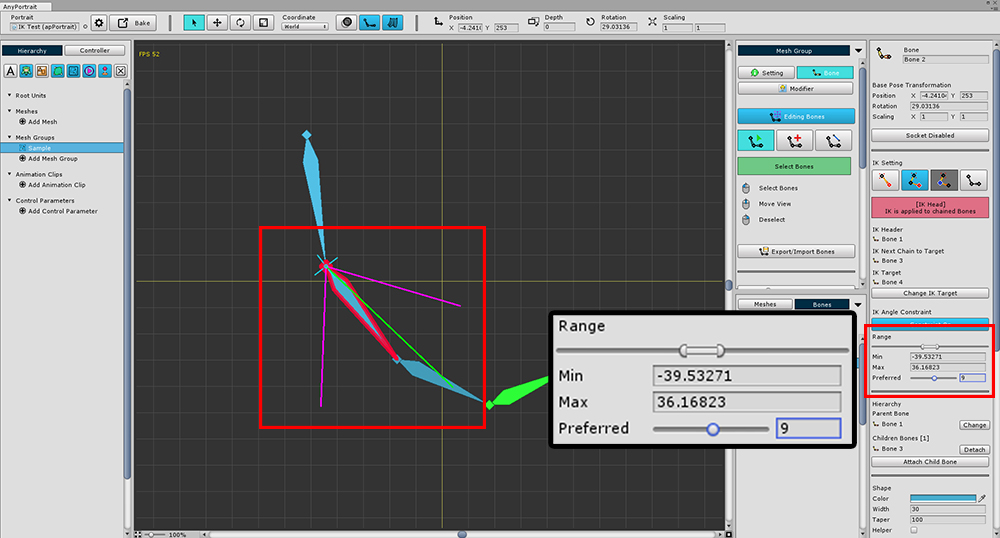 Sets the rotation limit range.
You can set the limit range with Min and Max values.
The Preferred value is the angle that is the basis of the IK calculation expression.
Bones with angle constraint can be viewed intuitively on the screen. 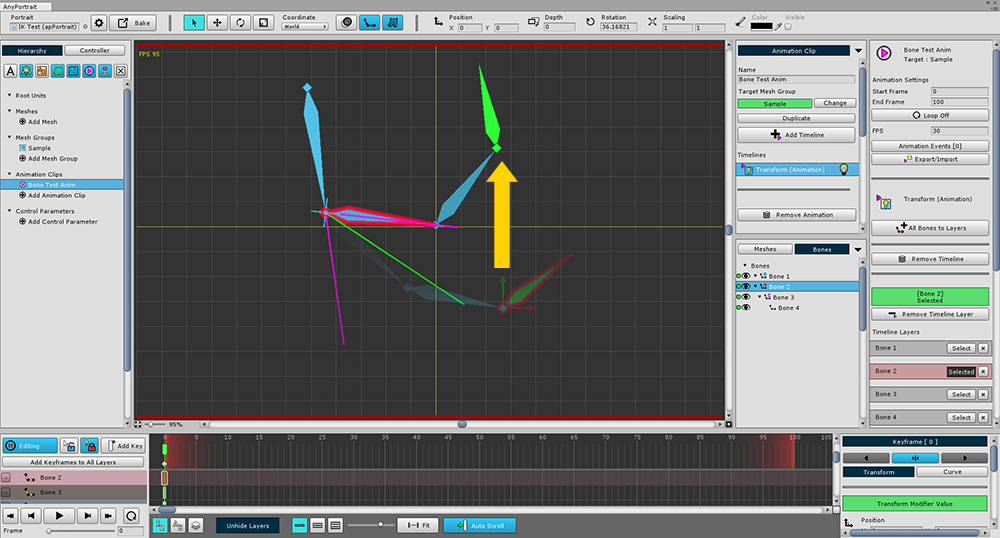 IK angle constraints can be found in the modifier or animation.
(Note : Since it is a function of limiting the rotation deformation value, it is not possible to check on the mesh group-Bone tab.)
When you work on a modifier or animation, you can see that the angle-limited IK is executed as in the above screen.

This setting also applies to games. 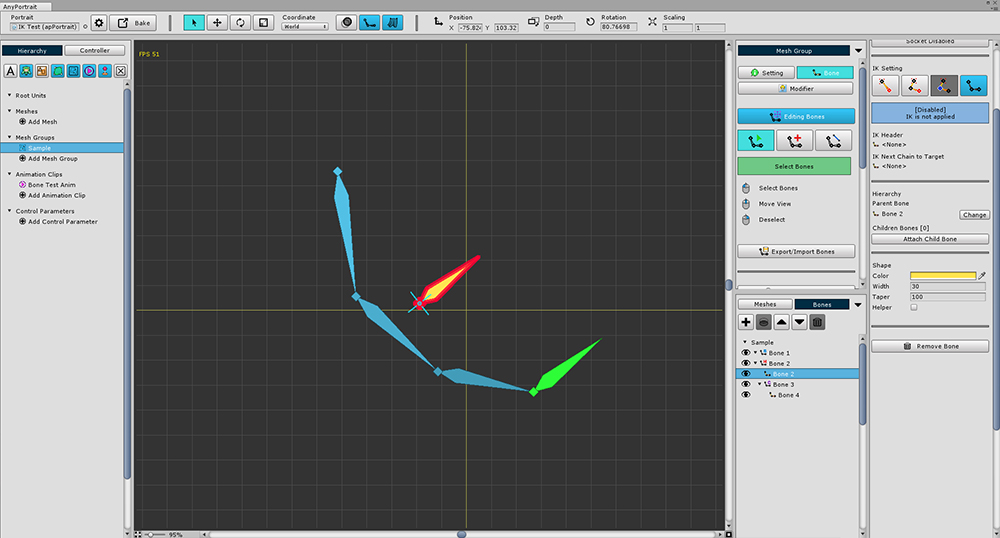 There are cases where IK should not be applied.
In the following cases, the parent bone is not related to the IK chain relationship. 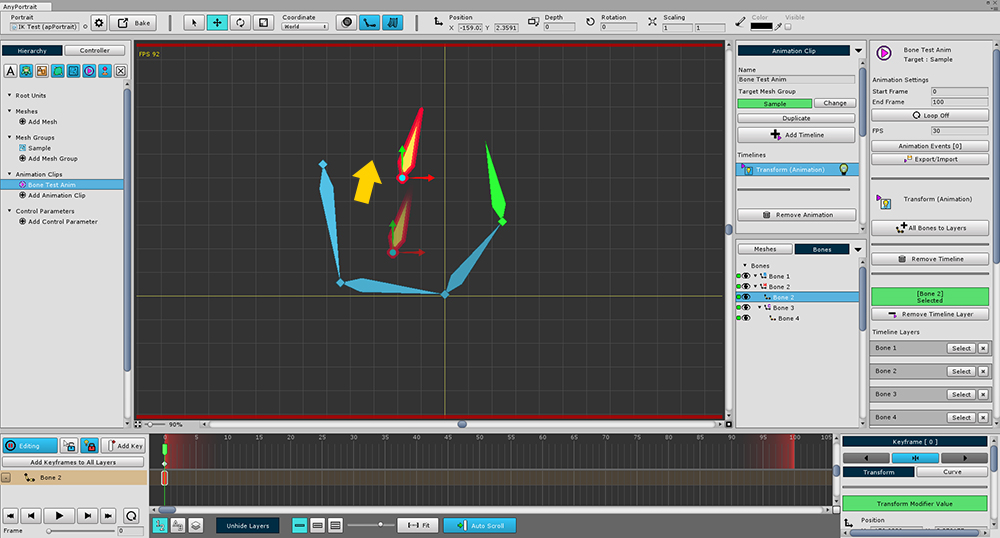 If IK is not set, the parent bone will not rotate.