Sometimes you need to switch the rendering order of the mesh while the animation plays or the game is running.
Or, you may need to switch images without a script.
Unlike other modifiers, these features are "no continuity".
So these two functions need to be set differently from other modifiers.
In AnyPortrait, this is called the "Extra option".

Controlling the Rendering Order with a Control Parameter 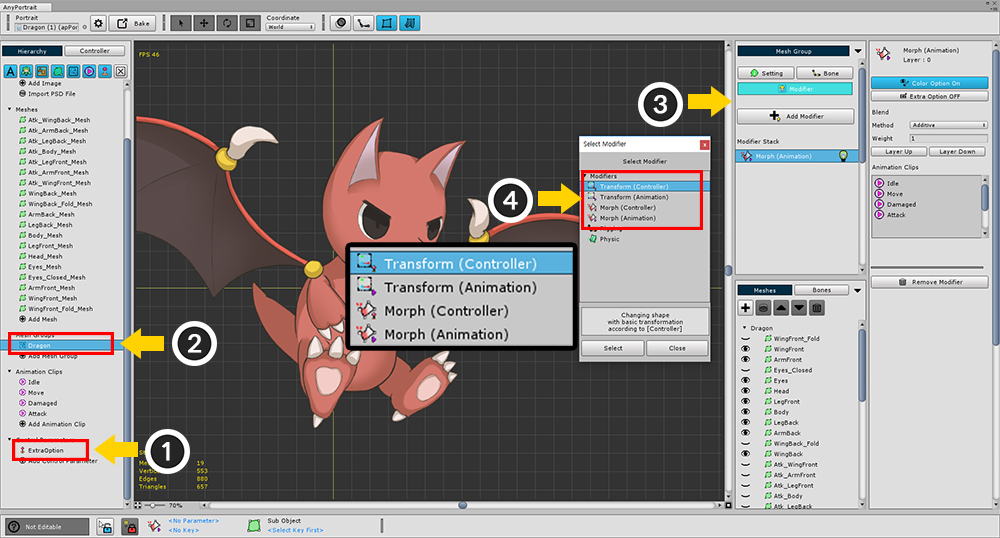 It is also possible to change the rendering order for child mesh groups.
However, since the Morph modifier only applies to meshes, we recommend using the Transform modifier or the Color Only modifier in this case. 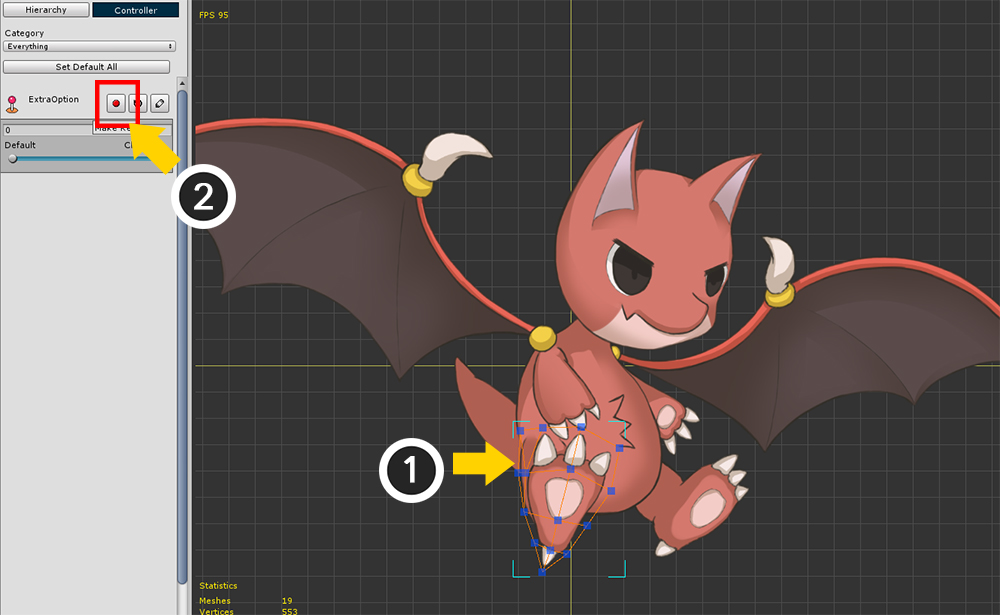 (1) Select the Mesh whose rendering order you want to change.
(2) Press the "Record Key" button of the Control Parameter to register the Mesh in the modifier. 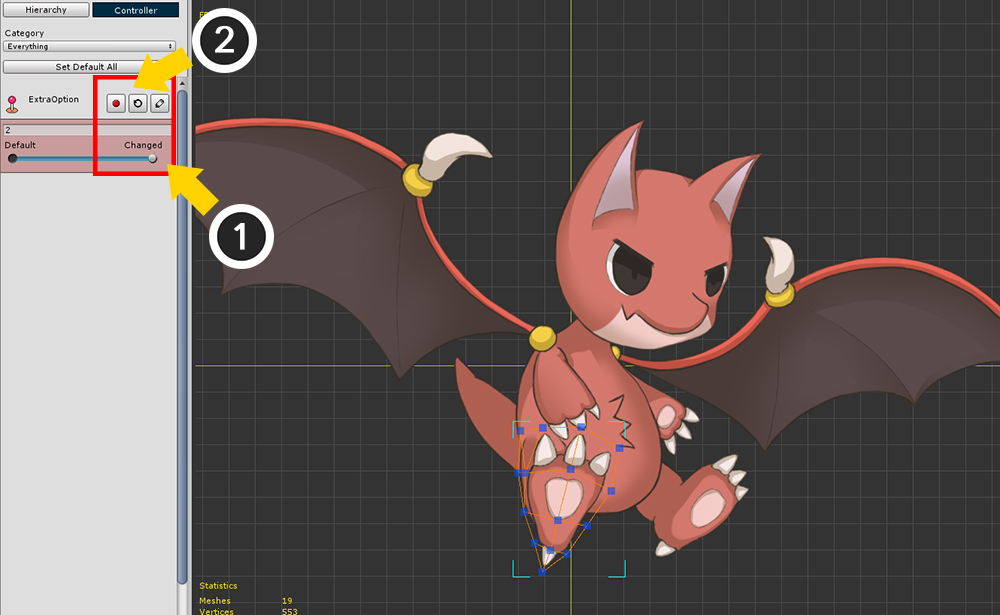 (1) Move the slider of the Control Parameter, and (2) Generate the second key. 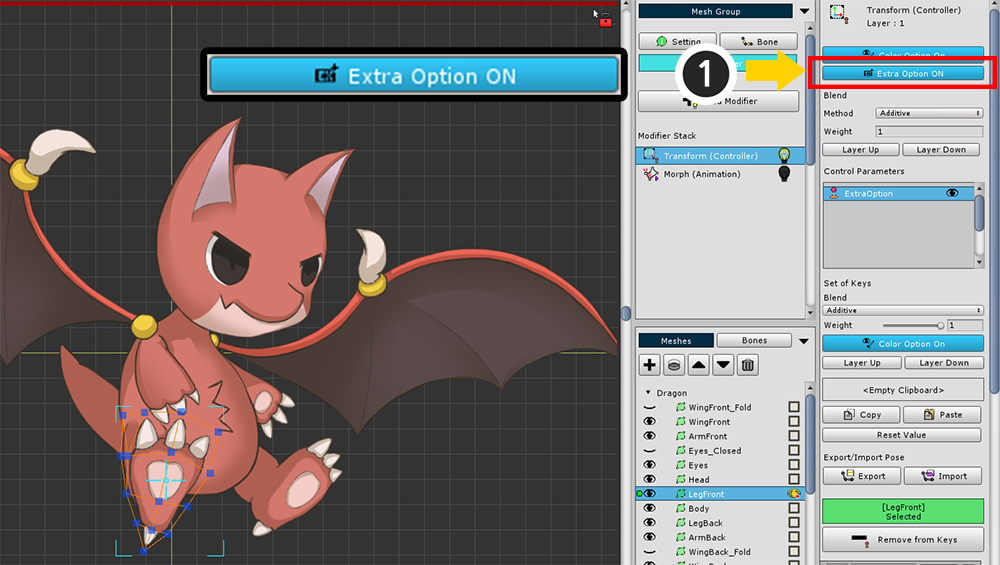 (1) Activate the Extra option by pressing the "Extra Option" button on the modifier setting screen. 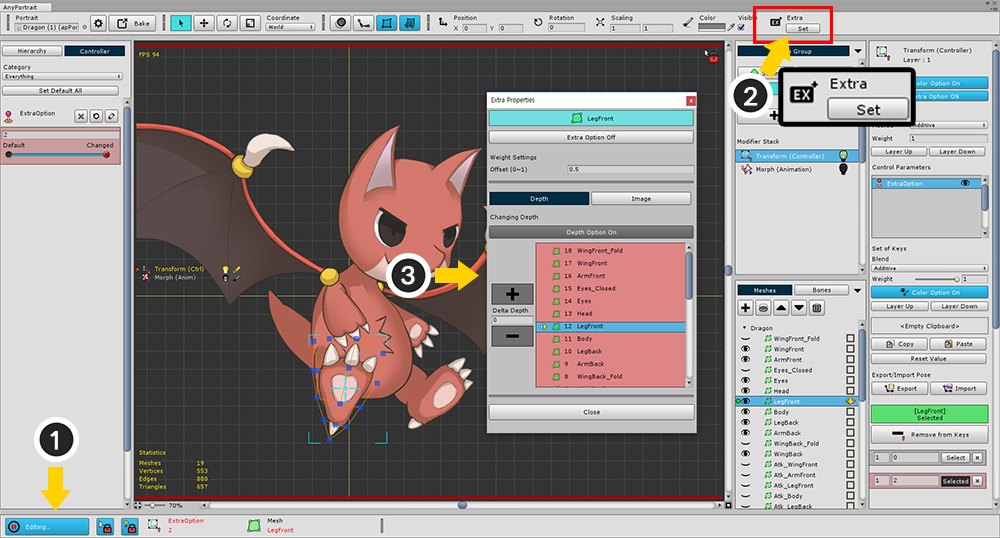 (1) Turn on Edit mode. (Shortcut: A )
(2) At the top of the screen, press the "Set" button of the Extra to open the Extra properties dialog. 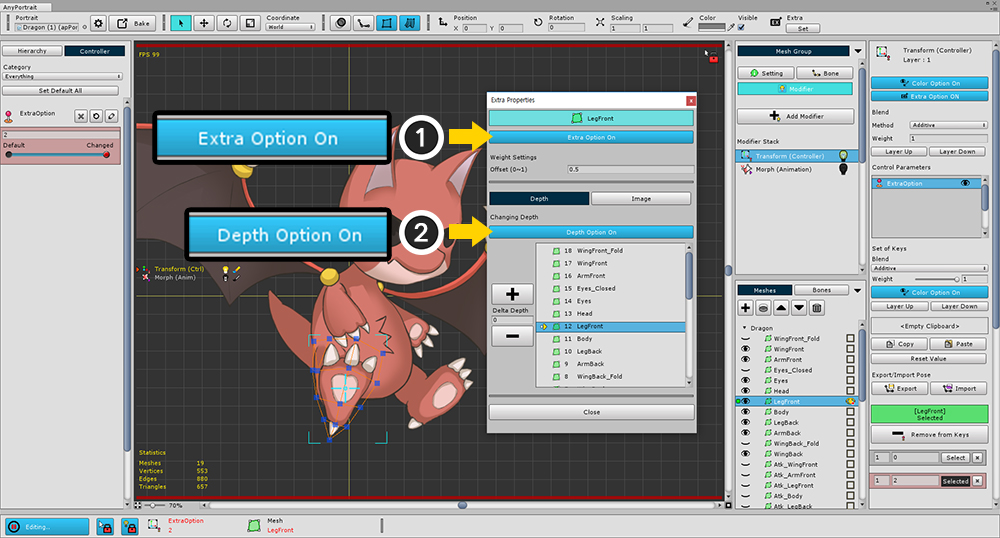 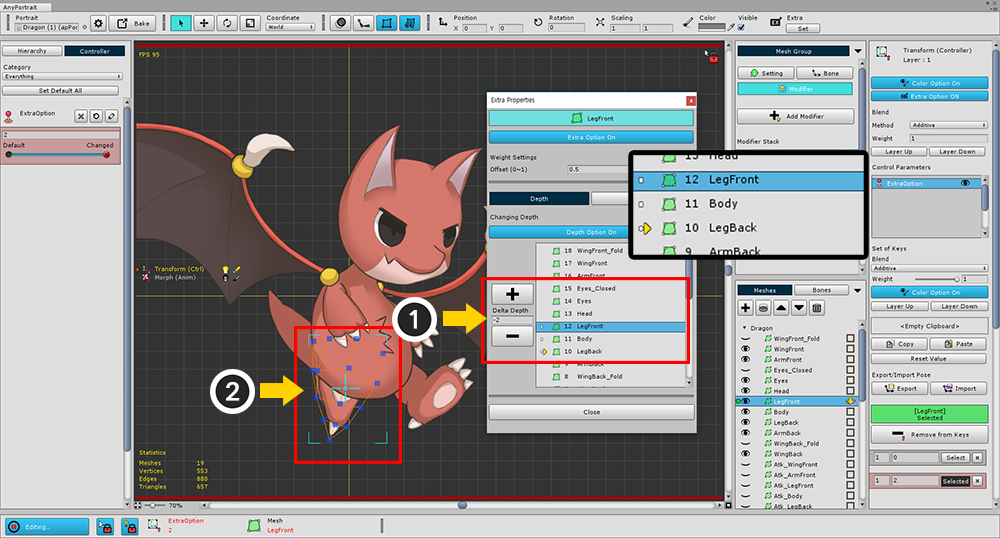 (1) Depth can be changed by clicking the "+" or "-" button.
Alternatively, you can change the rendering order by changing the value of the Delta Depth.
(2) In this example, the leg is moved backward by moving the Depth value by -2.
In the list, not all Mesh or Mesh Groups appear, only objects that can change the rendering order appear.
Sub Mesh groups as well as Meshes can also be reordered.
However, Clipped meshes are not movable.


The basic screen configuration of the Extra Properties dialog is as follows. 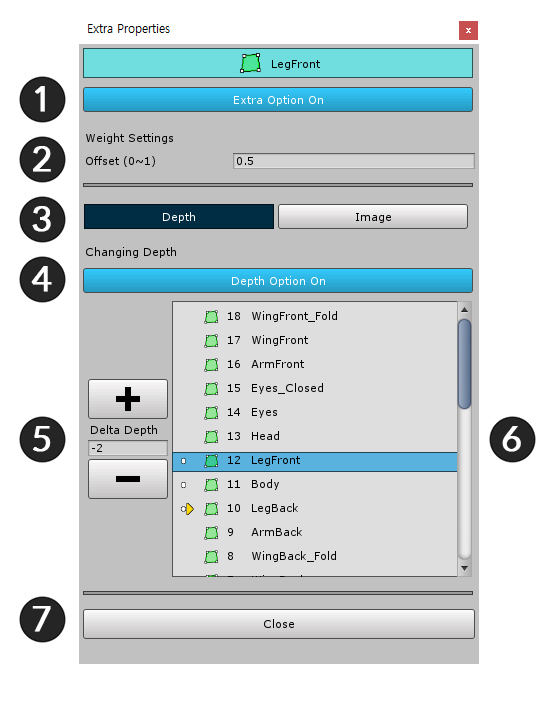 Now you can see that moving the slider of the control parameter changes the rendering order of the leg mesh. 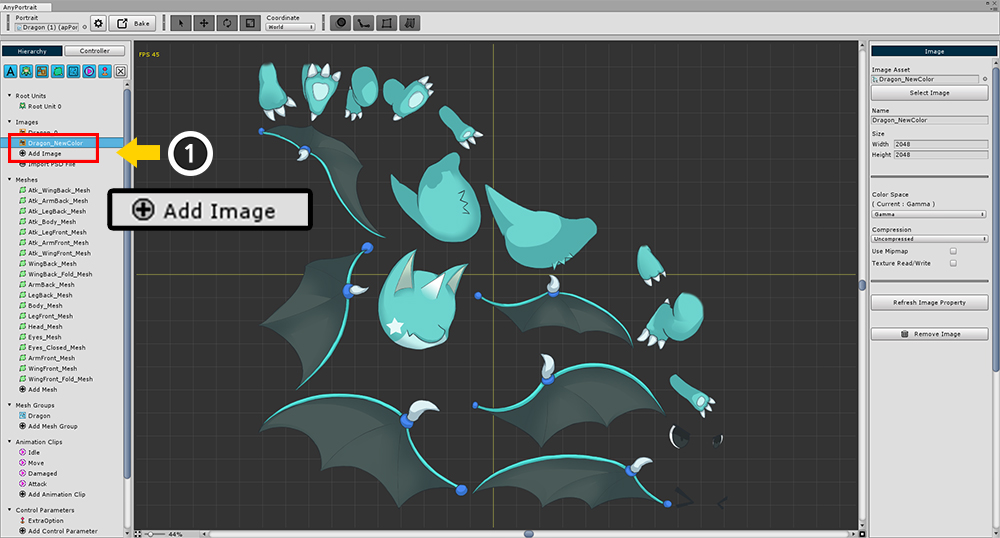 Add a new image for testing.
The structure of Atlas should be similar. 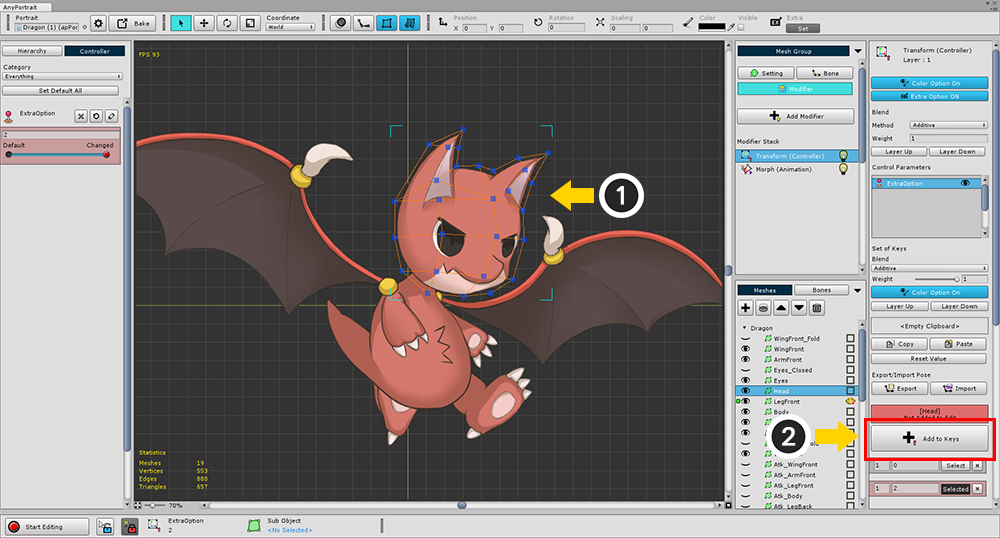 Let's change the image of the head mesh this time.
(1) Select Head mesh.
(2) Press the "Add to Keys" button to add meshes to this modifier and control parameters. 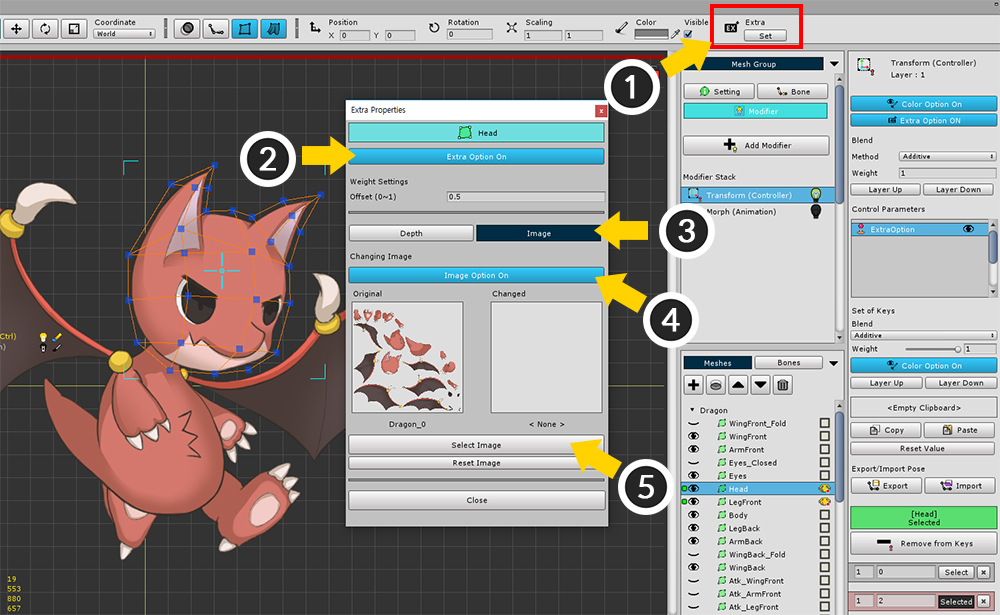 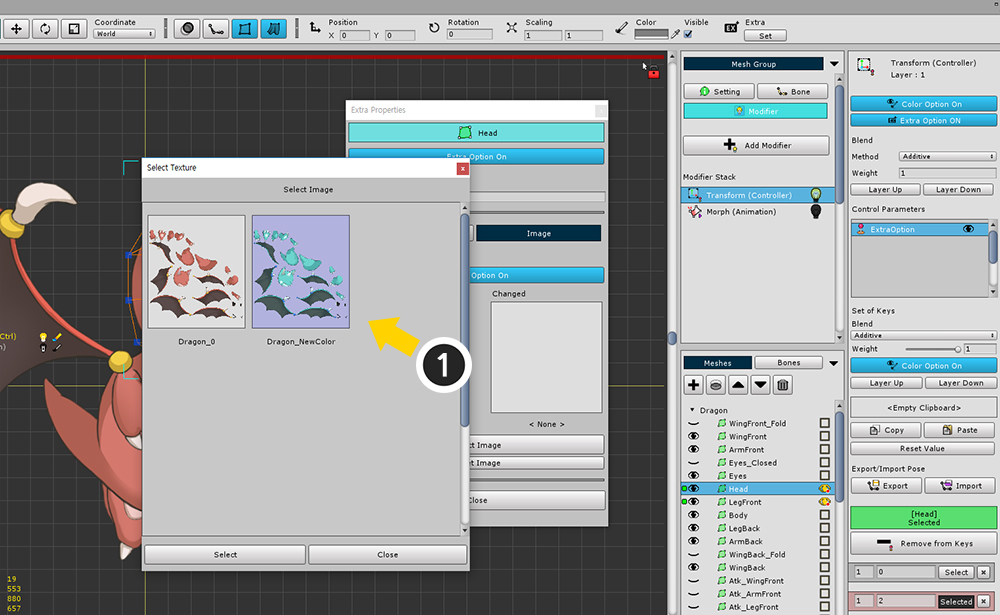 Select the image you want to change and press the Select button. 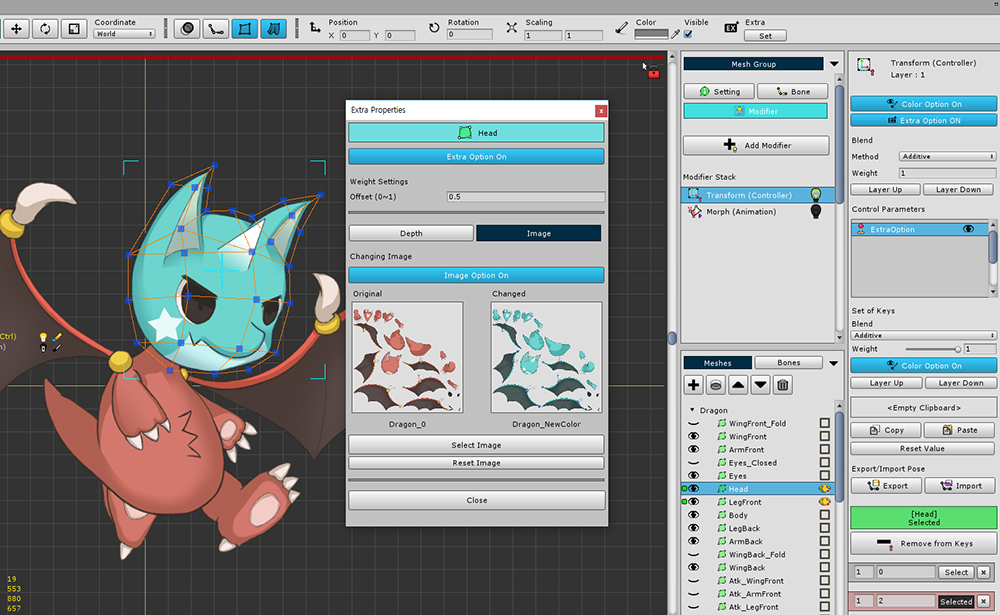 When an image is selected, the image is registered in the "Changed" slot, and you can actually see that the image of the head mesh has changed.


The screen configuration for switching images in the Extra Properties dialog box is as follows.

1. Image Option button : When the Image tab is on, toggles the image switching setting on or off.
2. Original / Changed Slot : Images before and after change are displayed.
3. Select Image button : You can select which image to switch to.
4. Reset Image button : Release the selected image. 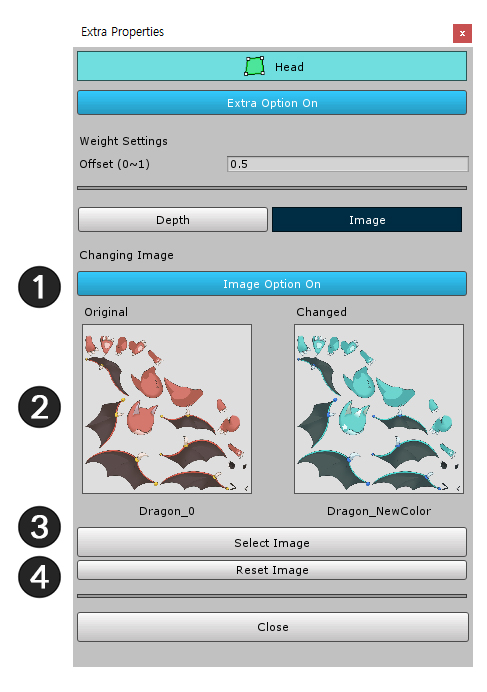 Moving the slider of the control parameter changes the image of the head mesh.

Applying Extra Options to an Animation 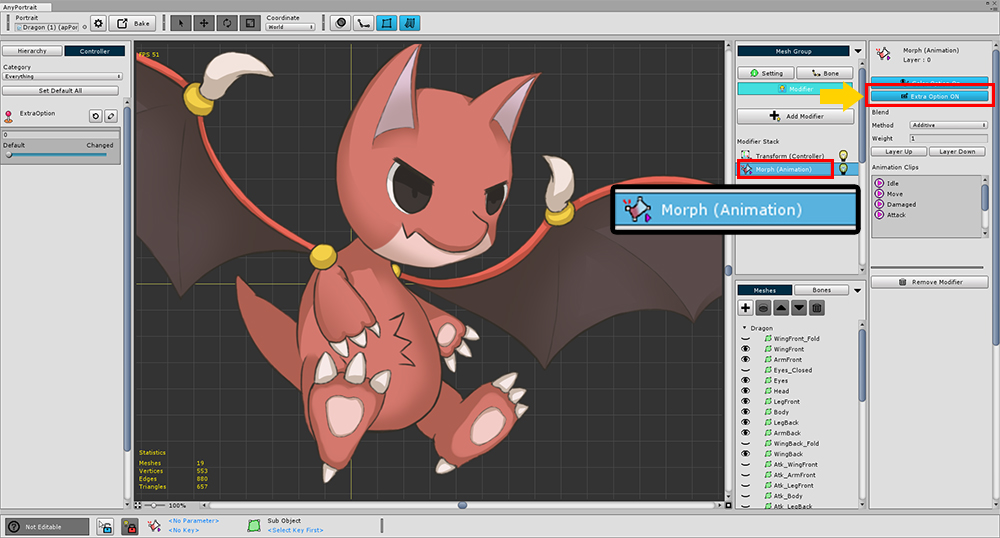 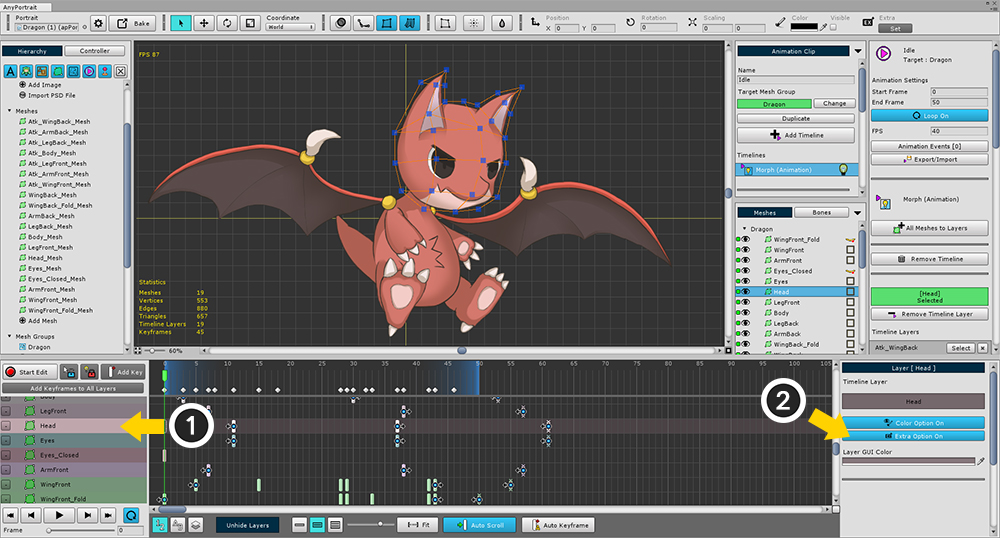 Alternatively, you can activate it by (1) selecting the timeline layer and (2) pressing the Extra Option button on the animation work screen. 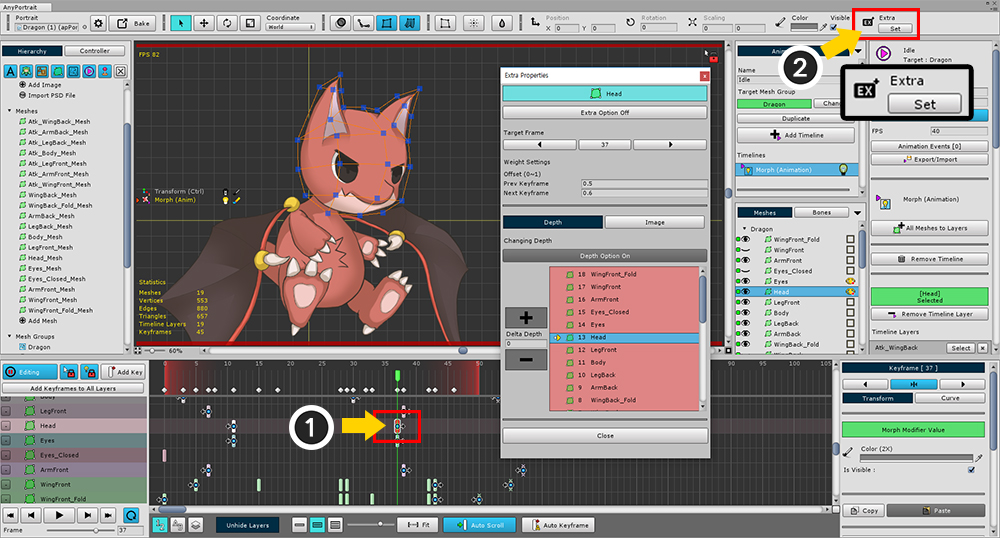 With the animation editing mode on, (1) select the keyframe.
(2) Press Set button of Extra option.
(If Edit mode is off, you can not press the Set button.) 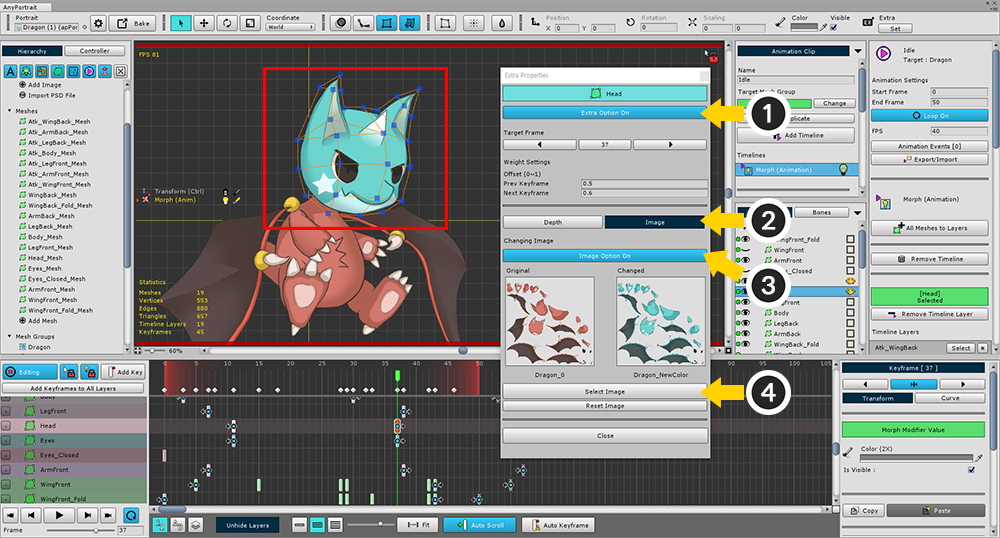 You can now see the image change in real time as the animation plays.


The screen configuration of the Extra Properties dialog box in the animation is slightly different.

1. Target Frame
: The position of the currently selected keyframe is displayed as a button.
Press the Left and Right buttons to move to the previous or next keyframe.
Pressing the number button moves the animation slider to the selected keyframe. 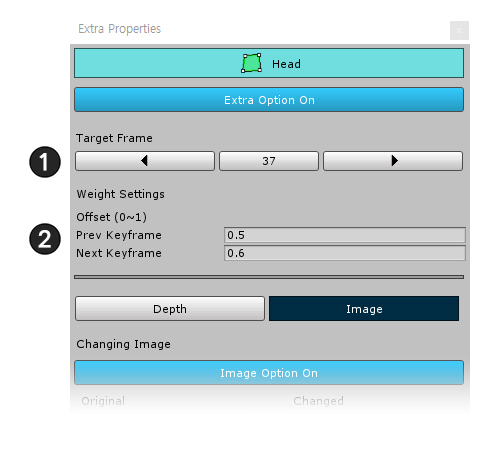 About Offset of Extra Options


In Extra options, Offset is the range to which the Extra function are applied.
Offset is not required for "continuous" changes such as position, rotation, size, or color.
However, since the Extra option is a "non-contiguous" change, you must set at what point it should be applied.

We have assumed that there is Key A with no Extra options and Key B with Extra options.
If key values such as control parameters or animation keyframes are changed, the results rendered will change.

The offset is the distance from the Key B to which the Extra option is applied.
The larger the offset value, the wider the area, and when the value becomes 1 (the max value), the range extends to Key A.

The offset value is basically 0.5.
In this case, the image will switch between the point of Key A and Key B.

If you set the offset value to 0.2,
The image is switched when the value of the control parameter or animation frame is closer to Key B.

If the offset value is increased to 0.8,
If the value of the control parameter or animation frame moves slightly from Key A, the image will be switched immediately. 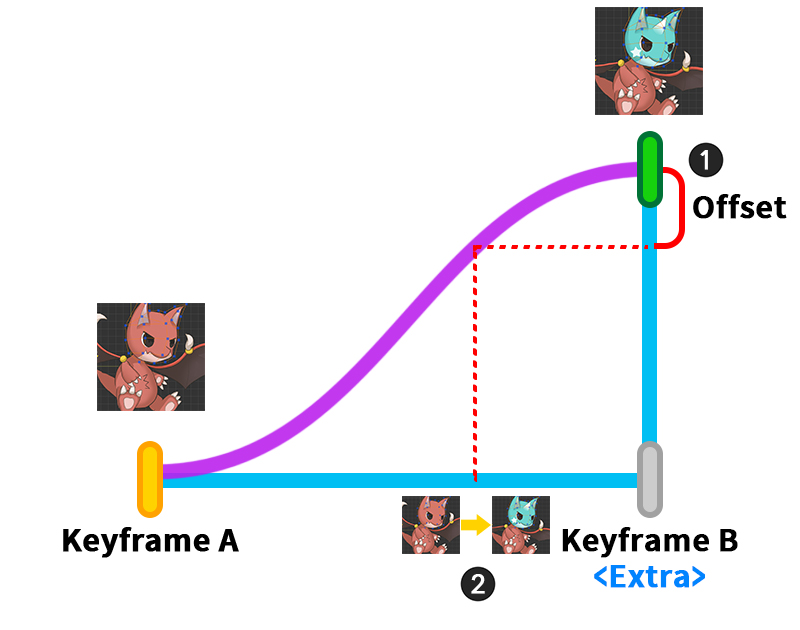 From AnyPortrait v1.3.4, it is supported to apply Extra Option to multiple objects at once. 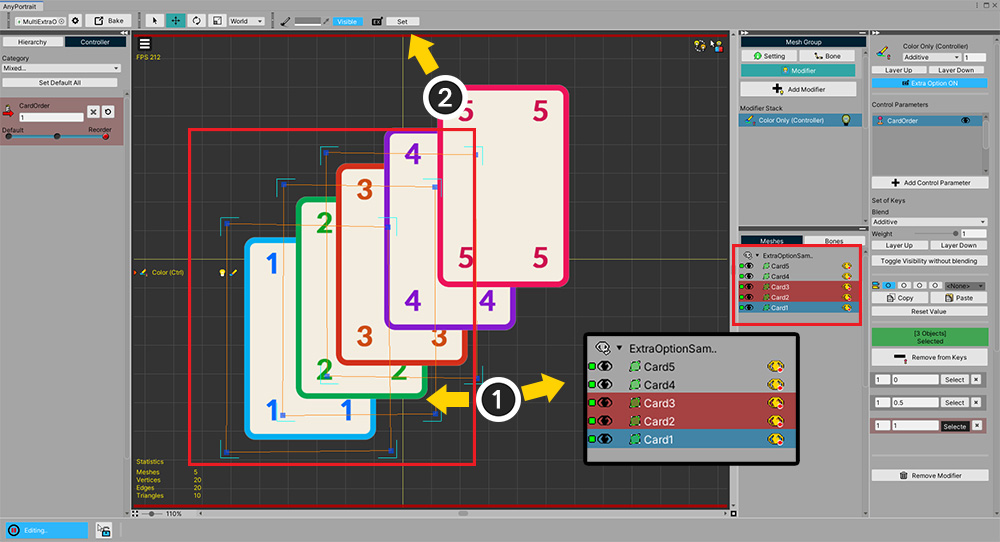 (1) Select multiple meshes registered in the modifier.
(2) With the key of the control parameter or the keyframe of the animation selected, press the Set button at the top of the screen. 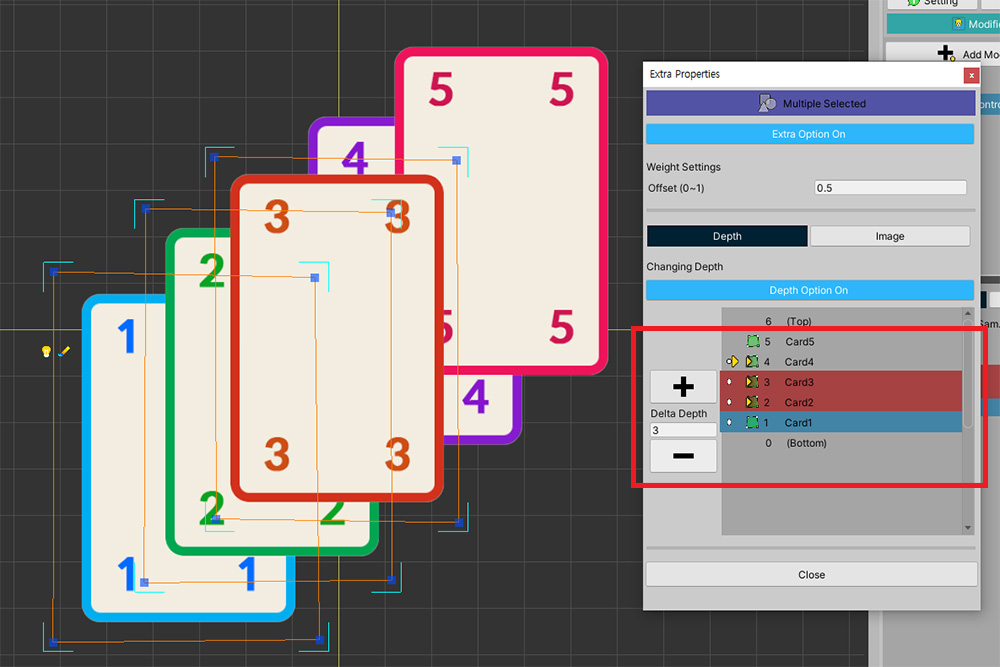 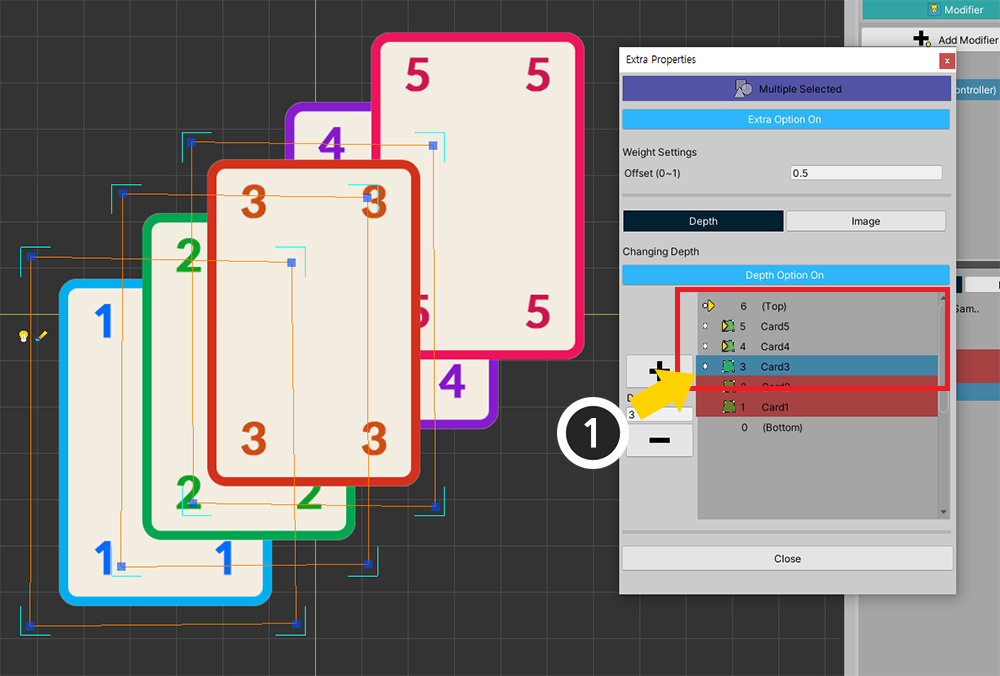 If you select another one of the selected meshes from the list, the depth change value of that mesh is displayed.

Let's check what happens if the depth values of different objects become the same. 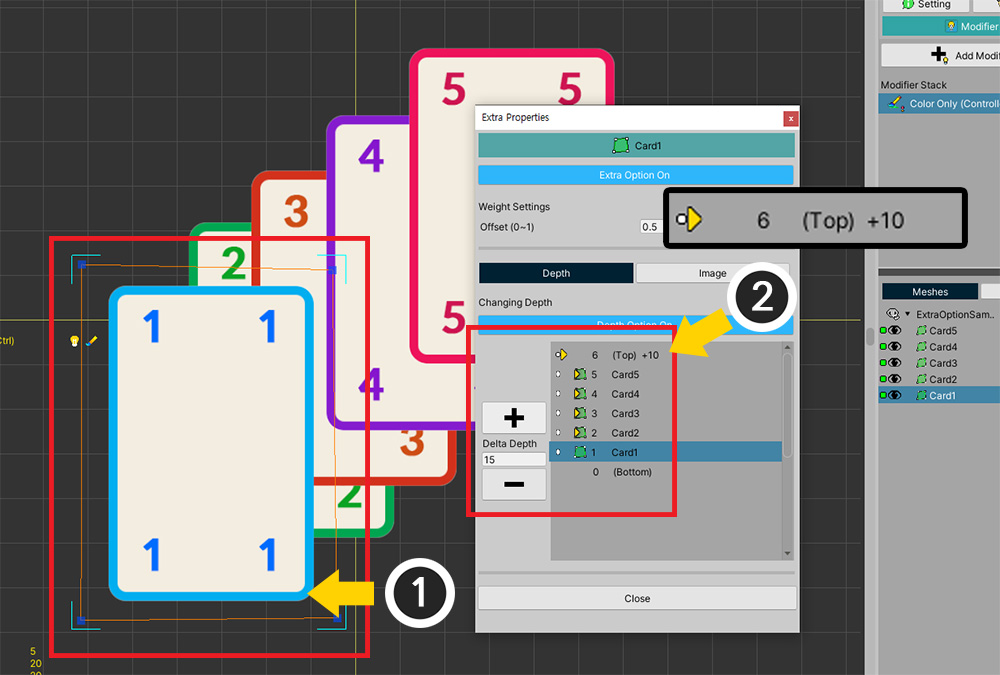 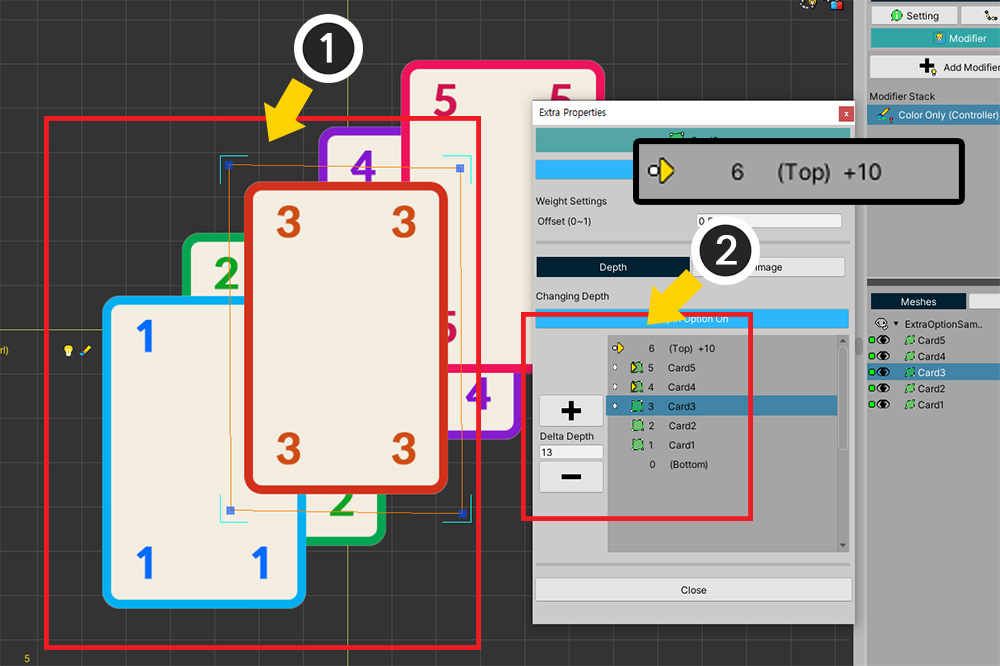 The depth of the two meshes is the same.
When checking meshes with the same depth, you can see that they are rendered in the original order.

If objects have the same Depth by Extra Option, the rendering order is determined according to the rules below from v1.3.4.
- If they have the same depth, the existing rendering order is applied.
- Requests with increasing Detph take precedence over requests with decreasing Detph.
- Among the depth increase/decrease requests, the one that is processed first is considered to change the depth more in that direction.