The previous Modifier Lock function has been improved to Edit Mode Options in AnyPortrait v1.3.0.
You can set how the modifier behaves in the Edit Mode, how objects appear in the workspace, and so on.
This page describes the various options for Edit Mode one by one. 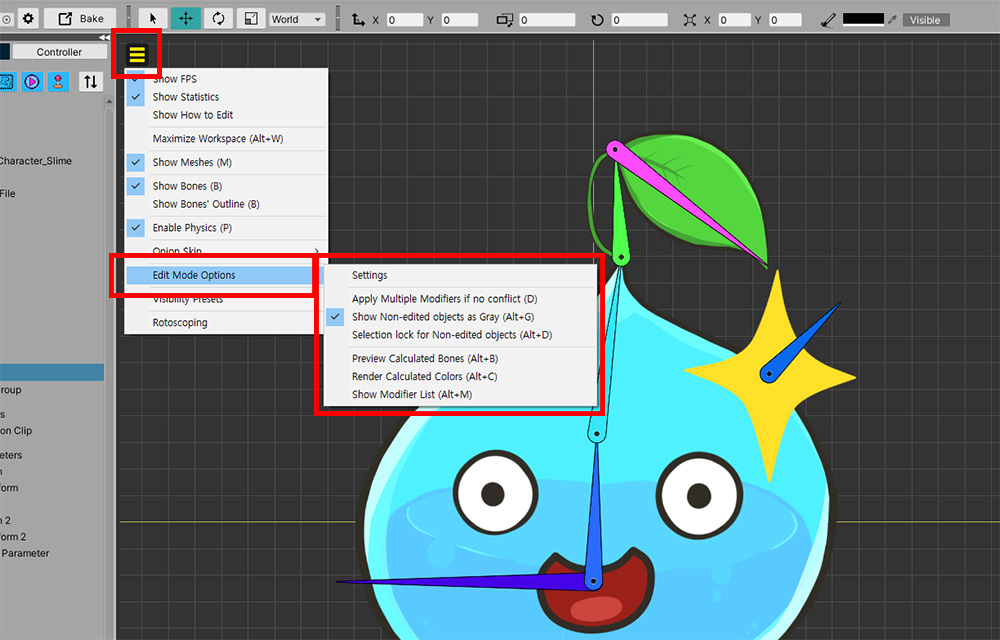 When you select Edit Mode Options in the View Menu, the above menus appear. 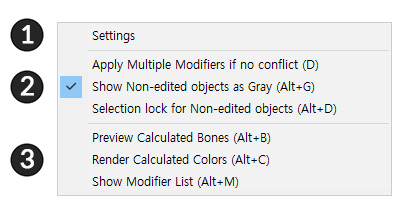 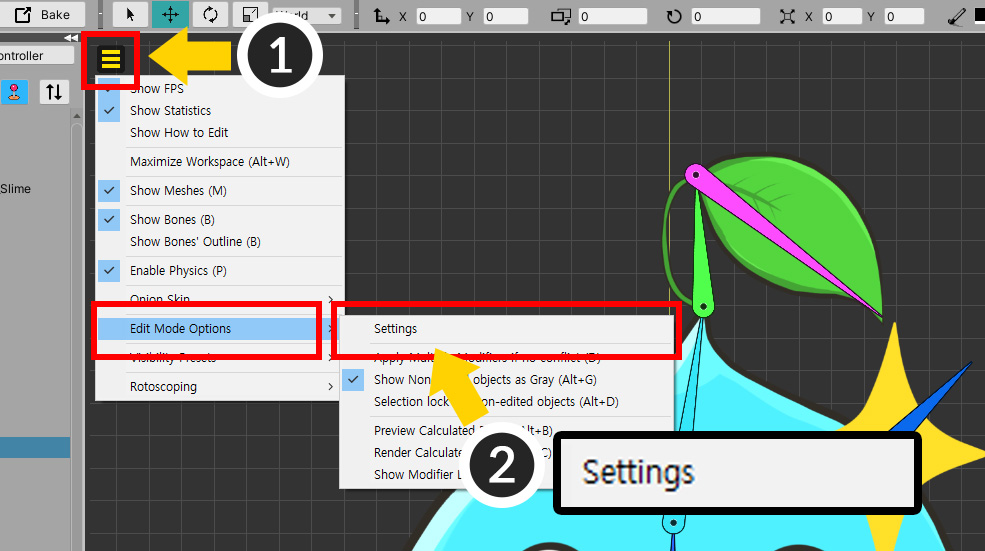 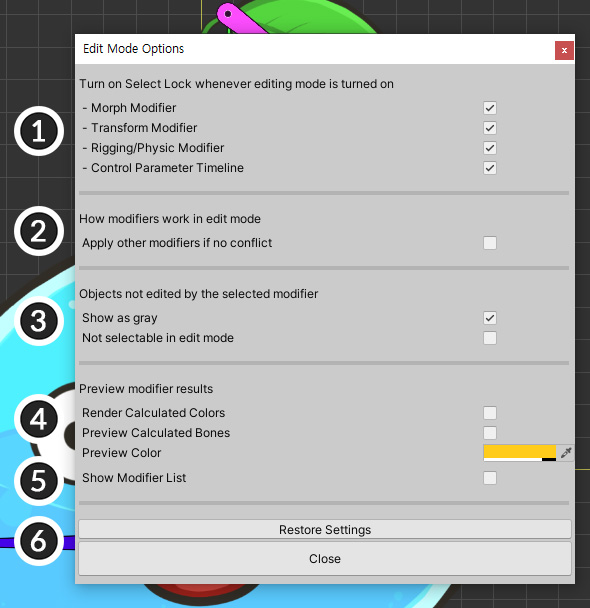 This is the setting screen of the Edit Mode Options.
There are additional settings along with the options in the edit mode.
(1) Set when Selection Lock turns on automatically.
(2) Set whether to make modifiers other than the selected modifier work.
(3) Set whether to make objects not registered in the modifier appear gray, and not be selectable.
(4) Set to preview the calculation result with other modifiers.
(5) Modifier List to make it easier to check which modifier is operating.
(6) Buttons to initialize the settings or close the settings window. 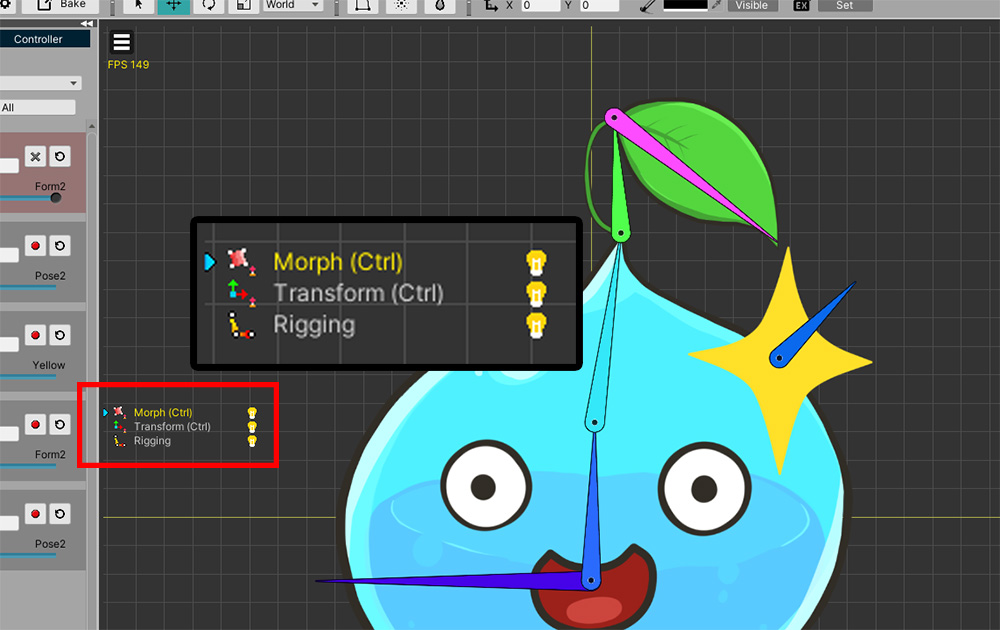 When Modifier List is turned on, the above information appears in the workspace.

This is a simple sample for the explanation.

Morph modifier deforms the shape of the slime's meshes.

Transform modifier moves the bones.
Rigging modifier is also applied, so the slime moves according to the movement of the bones. 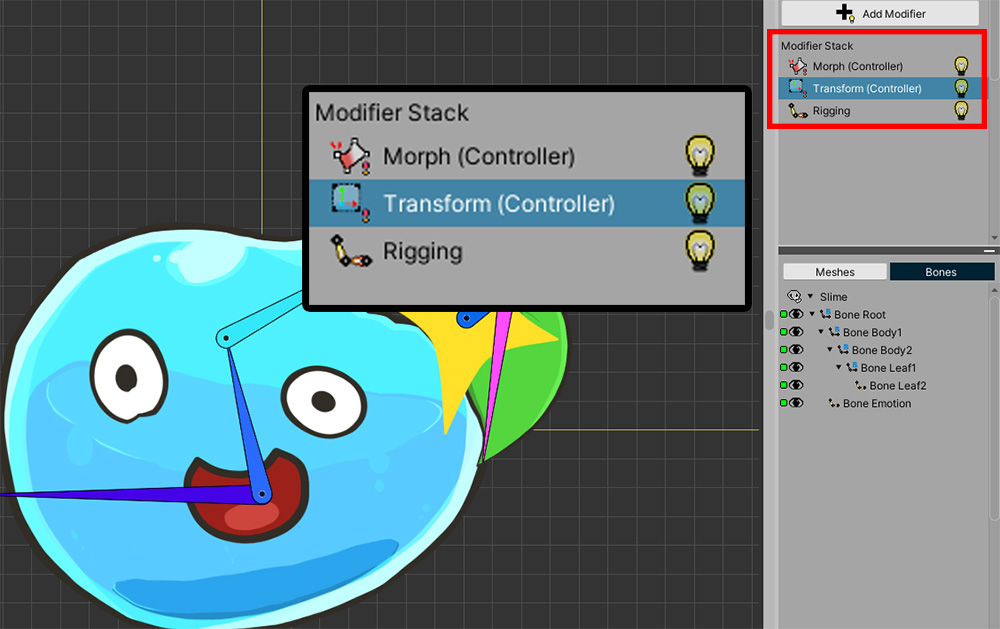 In this sample, you can see how the modifiers were applied.
These modifiers are controlled by Control Parameters. 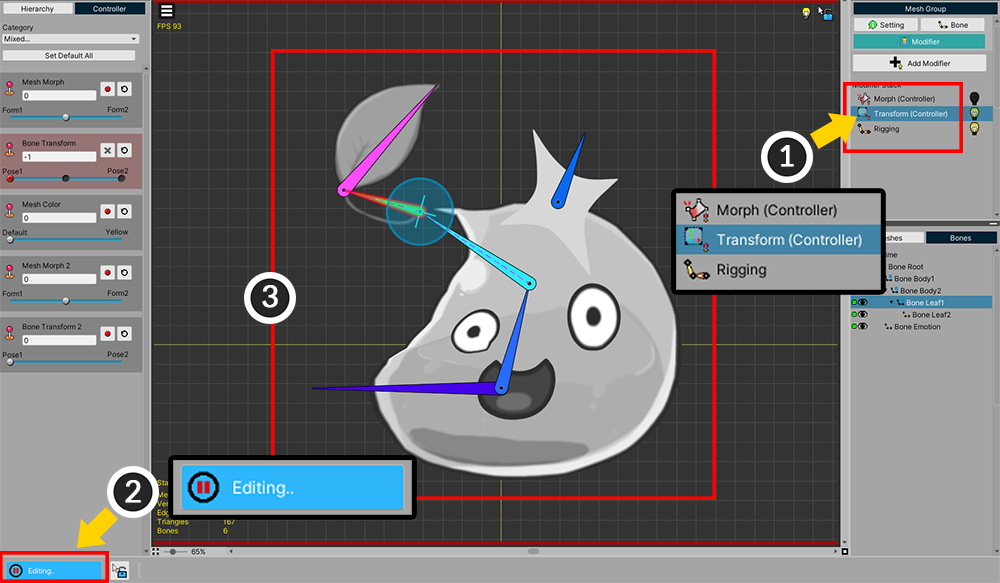 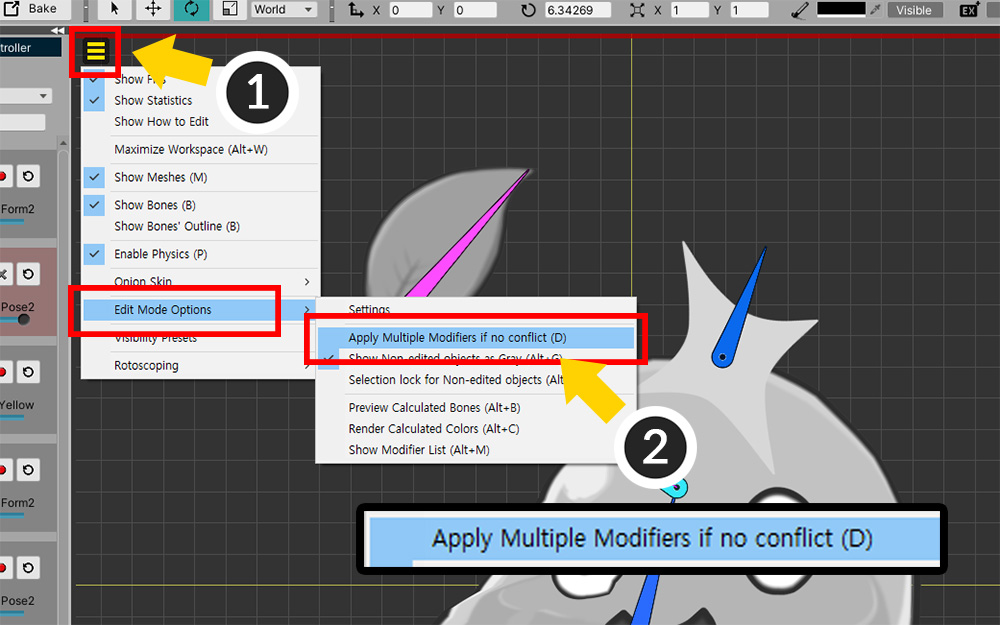 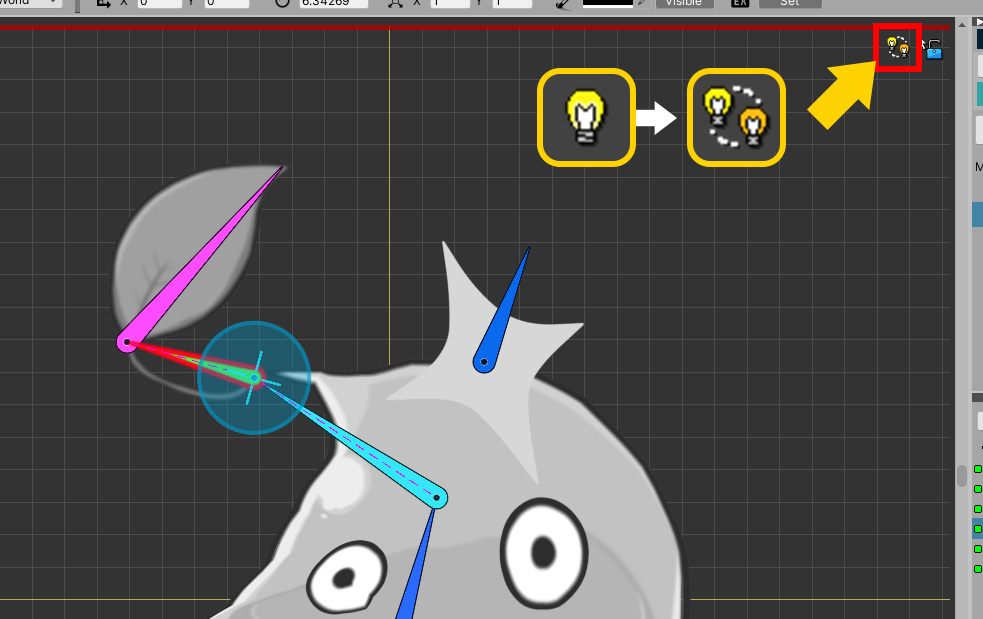 In the Multiple Modifiers state, the status icon changes as above. 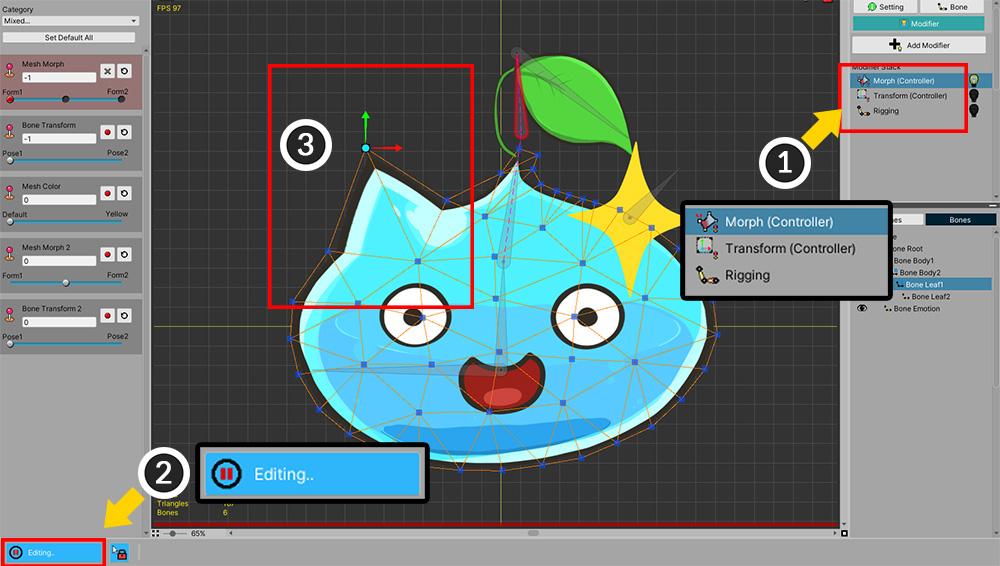 In the same way, turning on the Apply Multiple Modifiers option, the Transform and Rigging modifiers will work, so you can see the bones and meshes move. 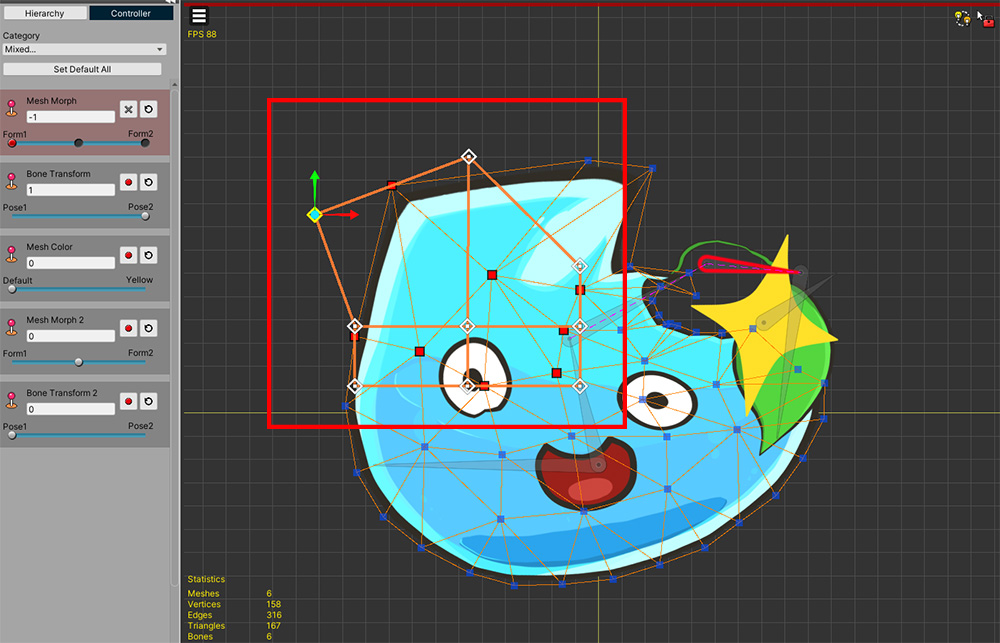 Also, it is now possible to edit vertices with the Apply Multiple Modifiers option turned on.

In other words, this function can work effectively when only modifiers with different meshes and bones are registered as above.
Of course, according to the rules above, it may apply in other cases as well. 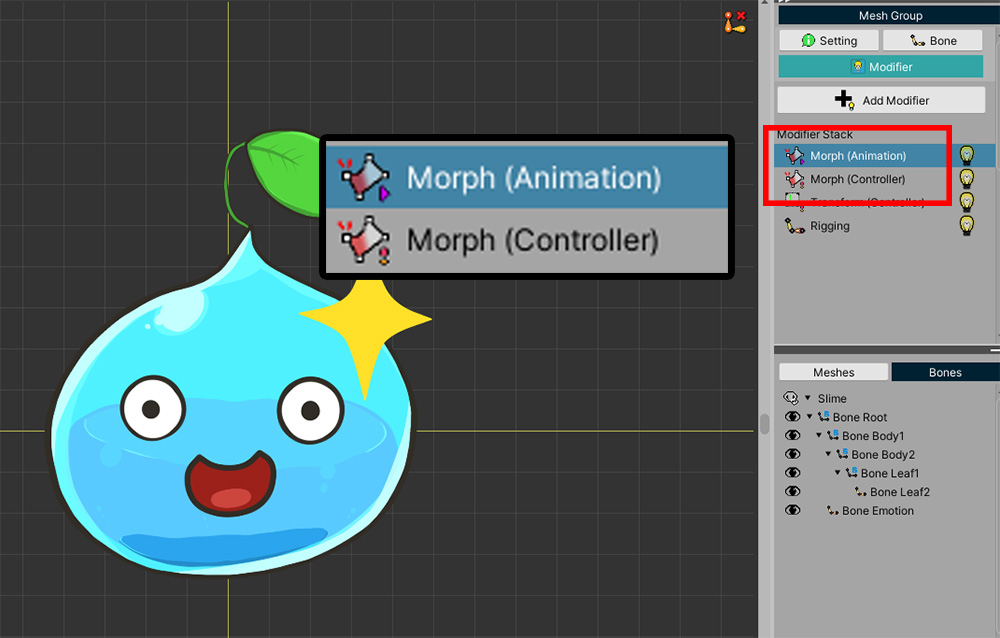 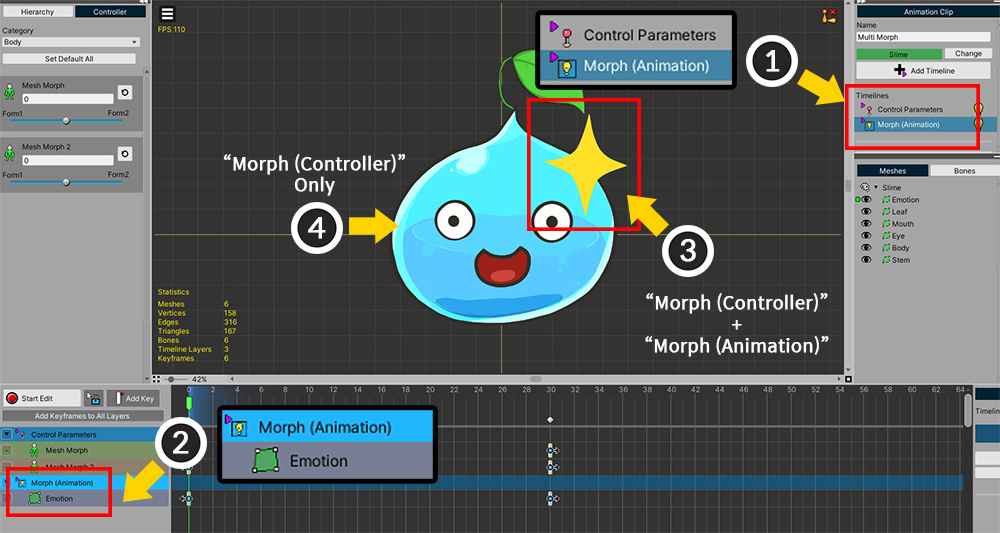 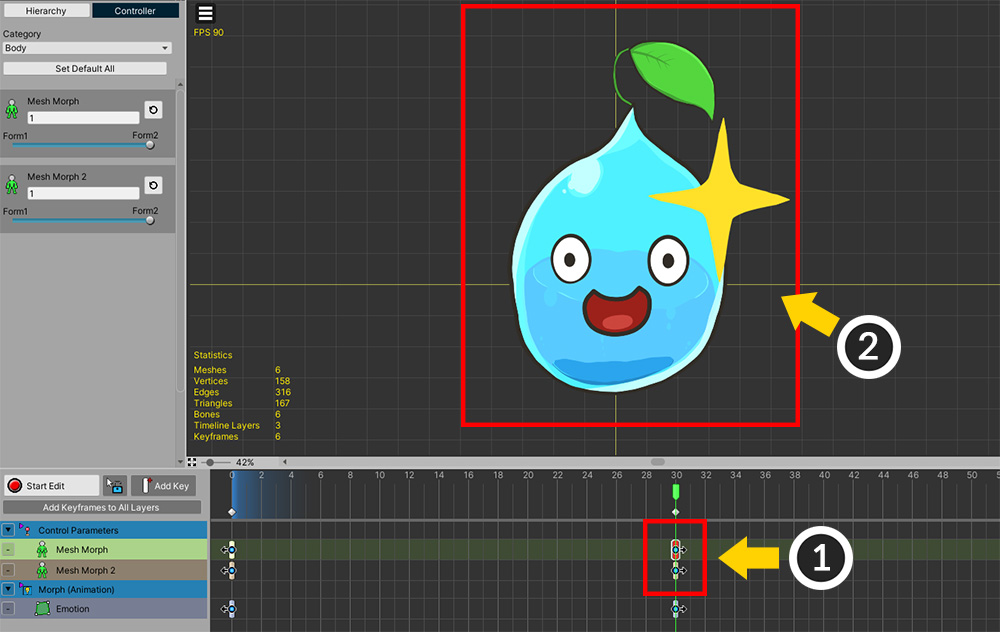 (1) When control parameters are controlled with keyframes, (2) the slime is deformed by the Morph (Controller) modifier. 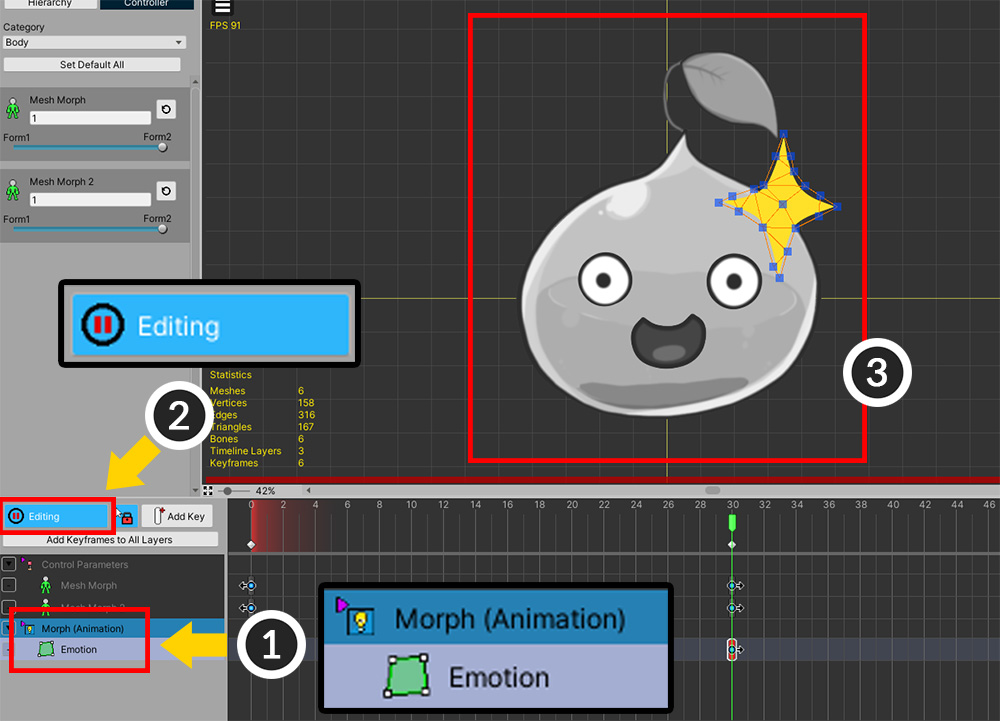 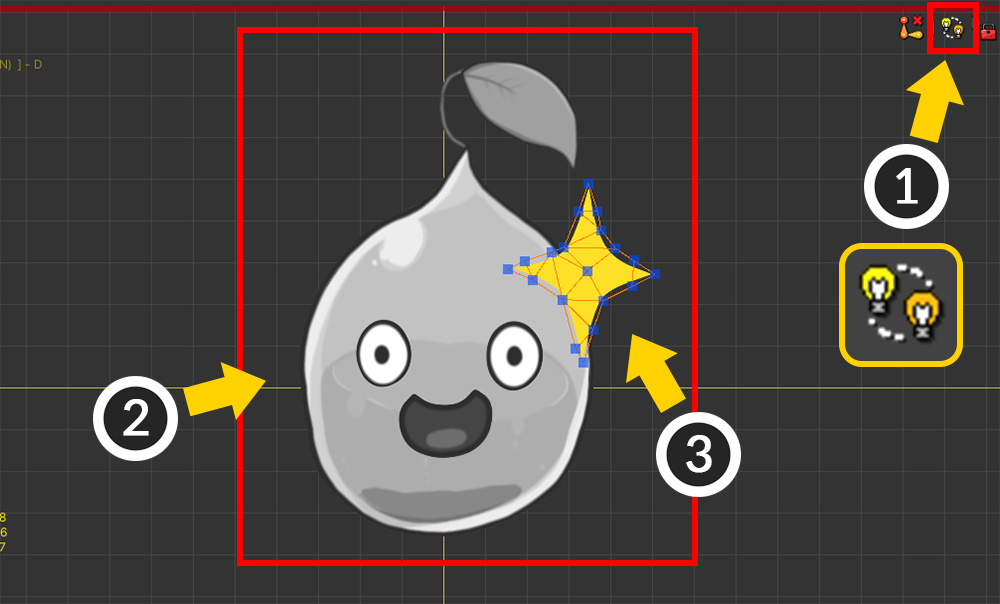 (1) Turn on the Apply Multiple Modifiers option (shortcut D ).
(2) You can see that other modifiers including the Morph (Controller) modifier are activated and applied to most of the meshes.
(3) But the "Emotion" mesh does not have the Morph (Controller) applied.
This is because other modifiers are not applied to the "object currently being edited" by the rules described above. 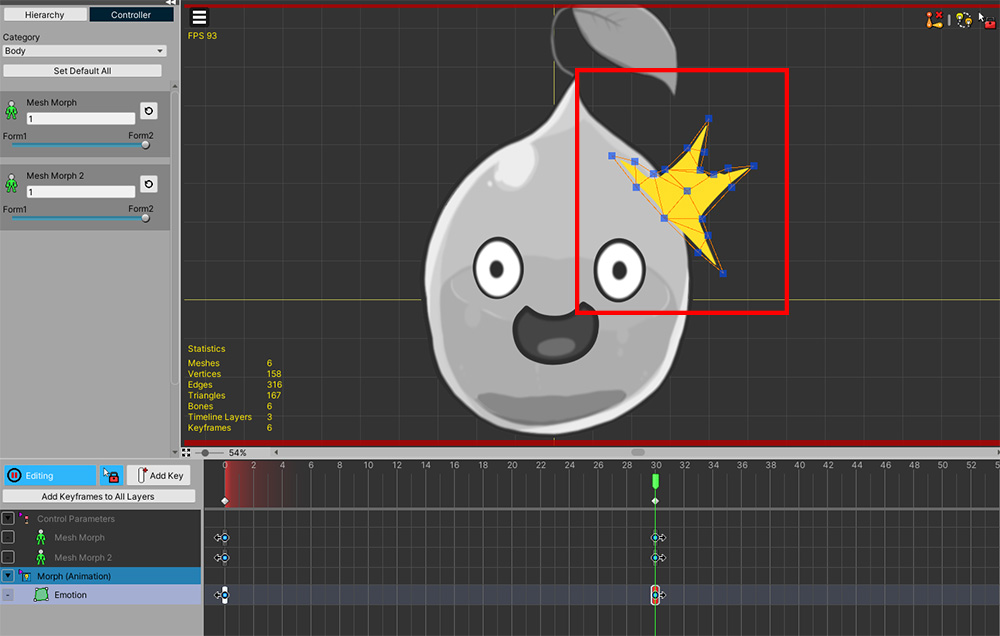 In this state, let's edit the shape of the "Emotion" mesh. 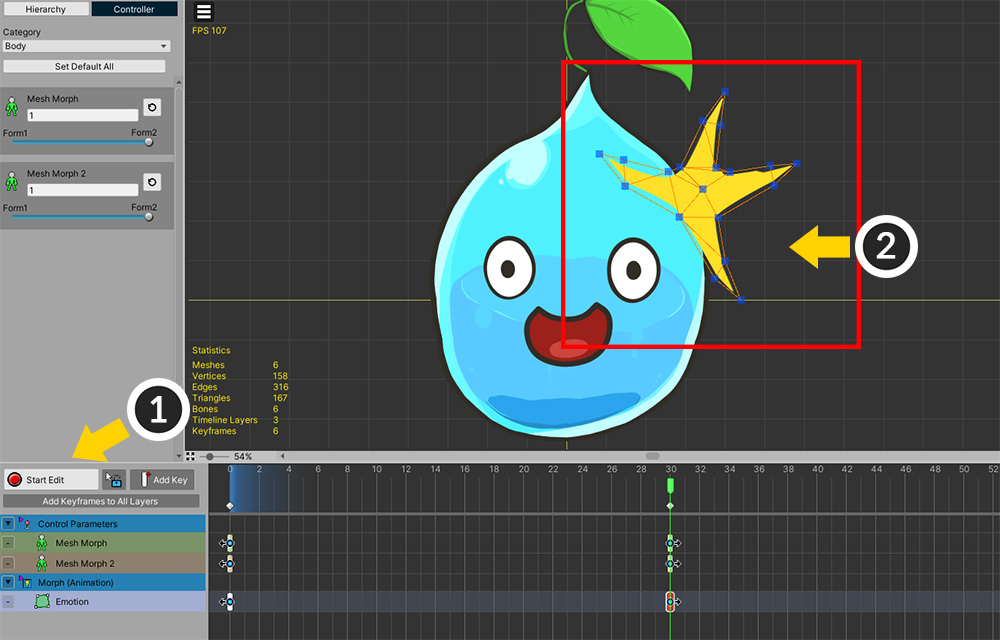 (1) Turning off Edit Mode, then (2) you can see that both the Morph (Animation) modifier and the Morph (Controller) modifier are applied to the "Emotion" mesh. 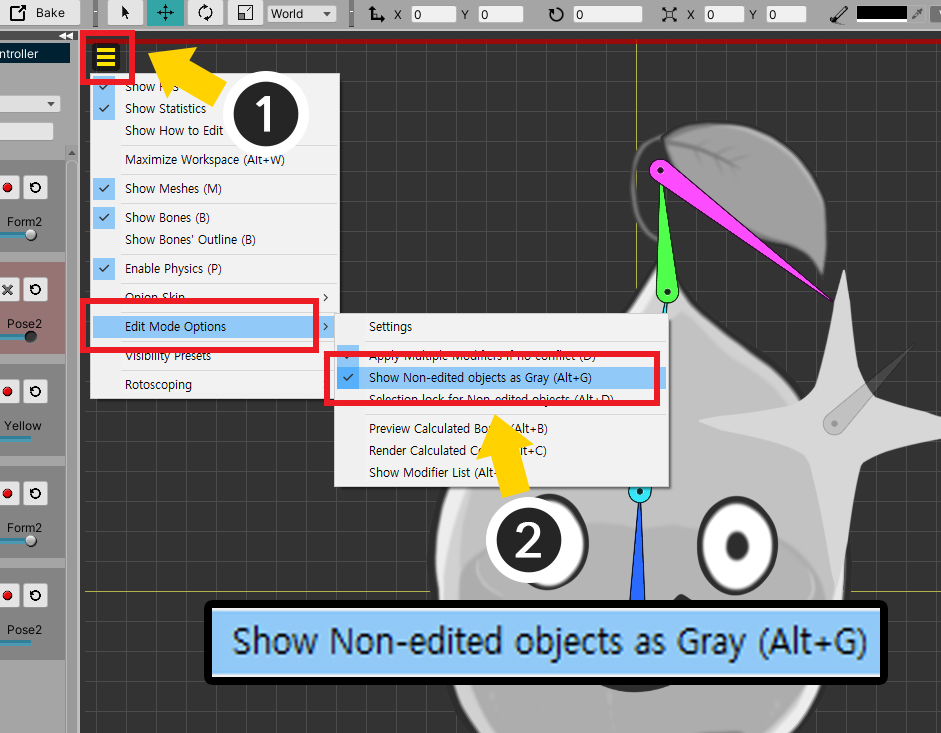 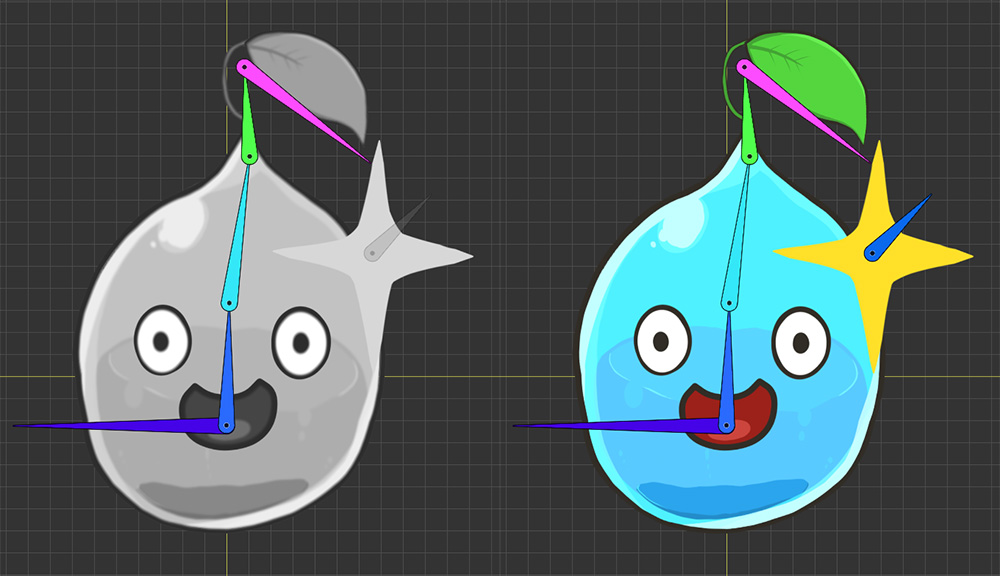 This option is a function to show the rest of the objects as gray except for the objects edited by the modifier.
If there are a lot of objects in the workspace, this option may be convenient because the targets of the modifier can be easily identified. 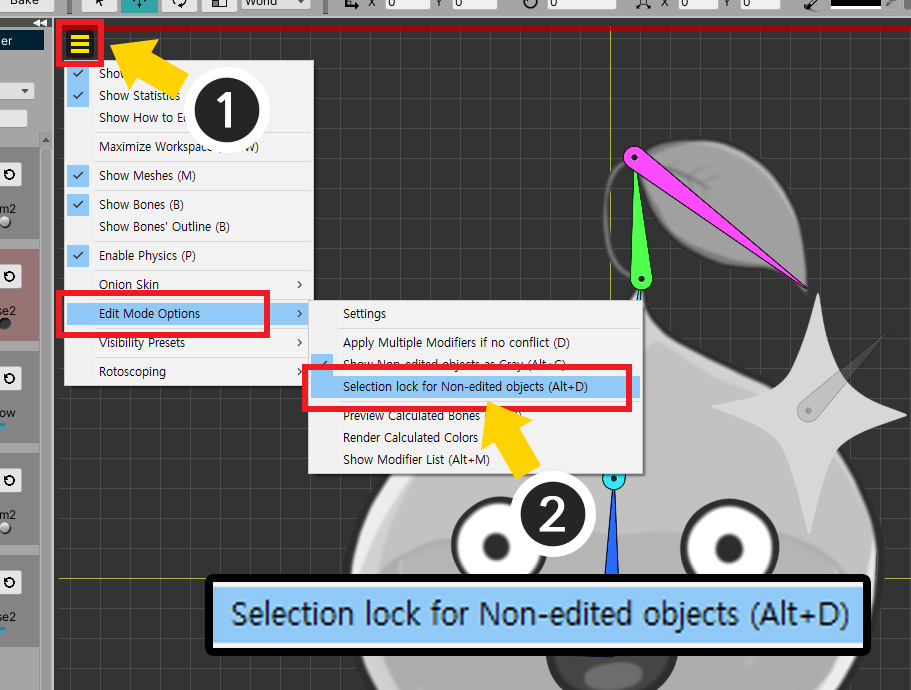 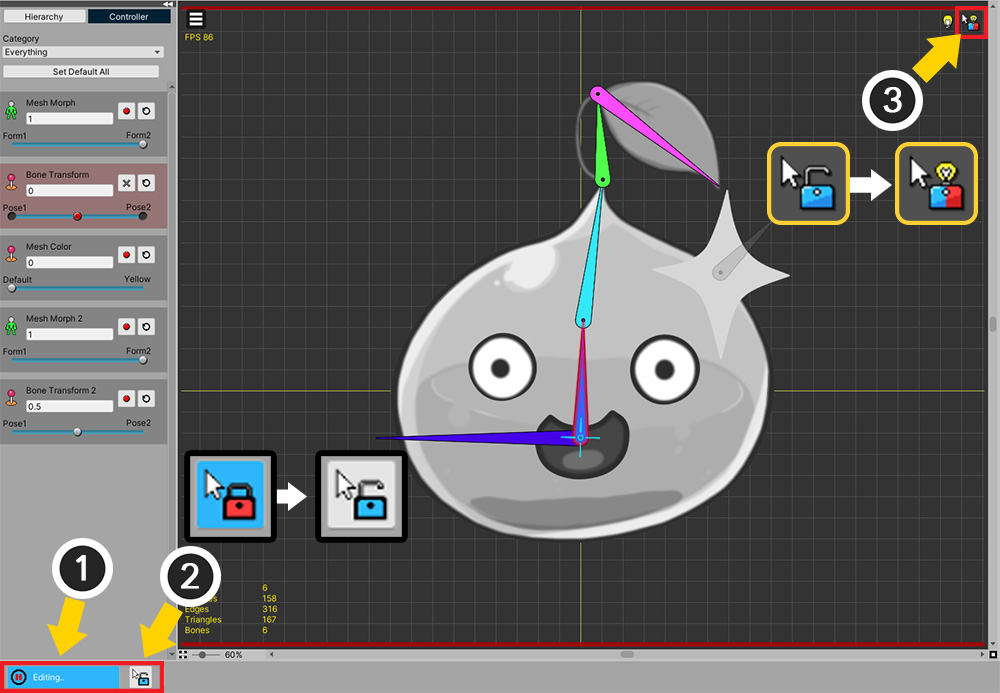 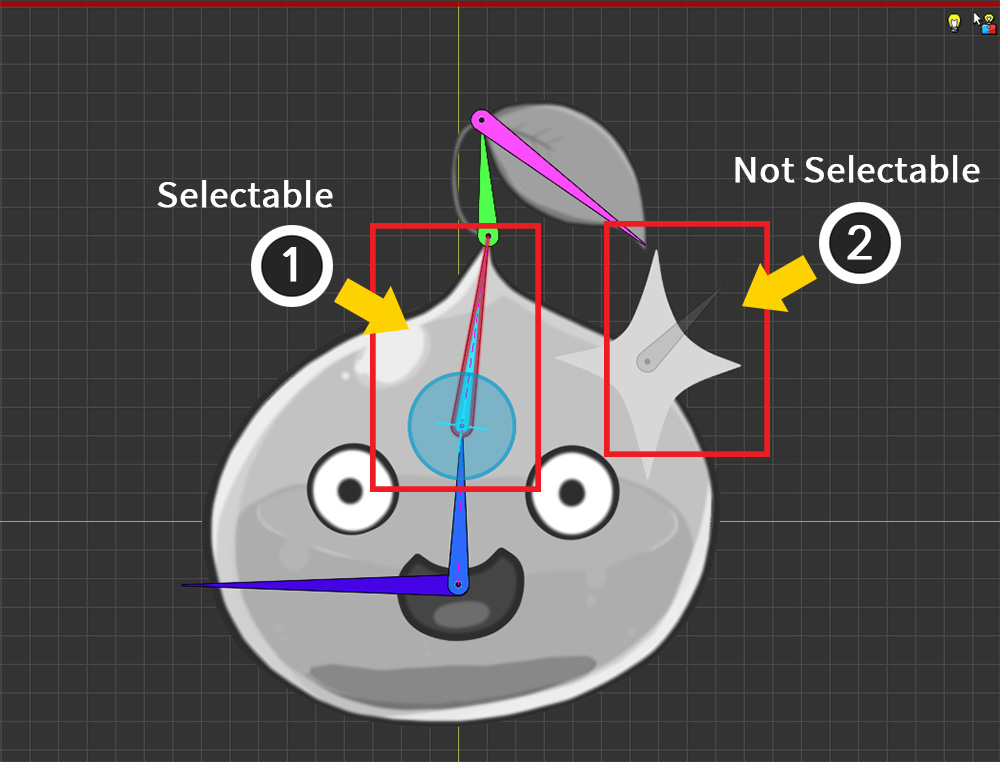 If you are using a lot of modifiers, have a lot of objects, and it is difficult to select an appropriate object with turning off Selection Lock, this option may be helpful. 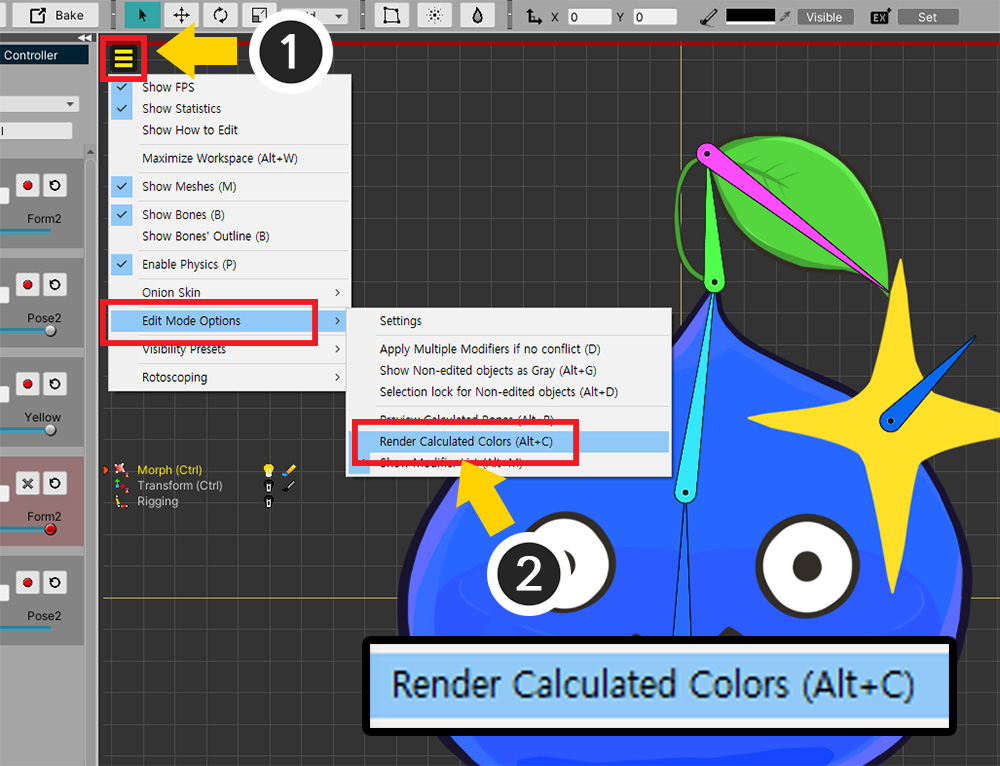 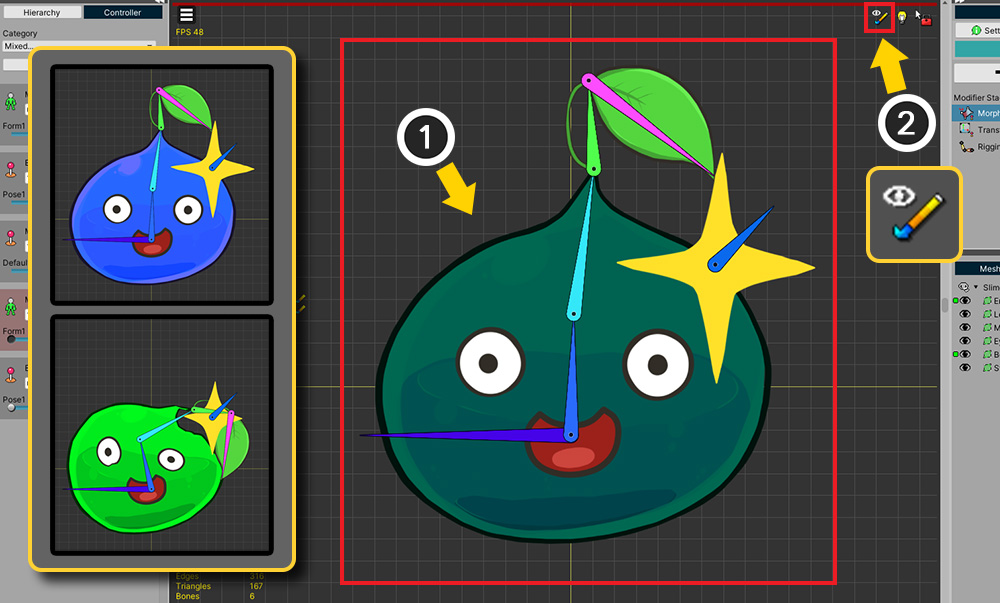 (1) Even with the modifier selected and Edit Mode turned on, you can see that all modifier color values are applied.
(2) The Preview Color icon appears. 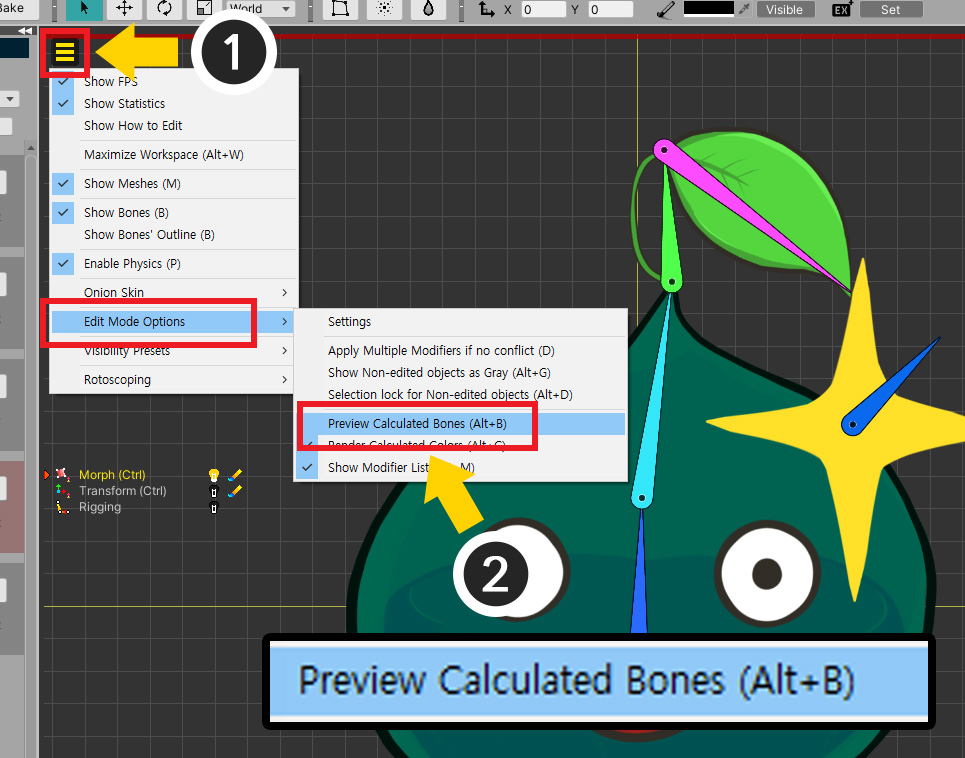 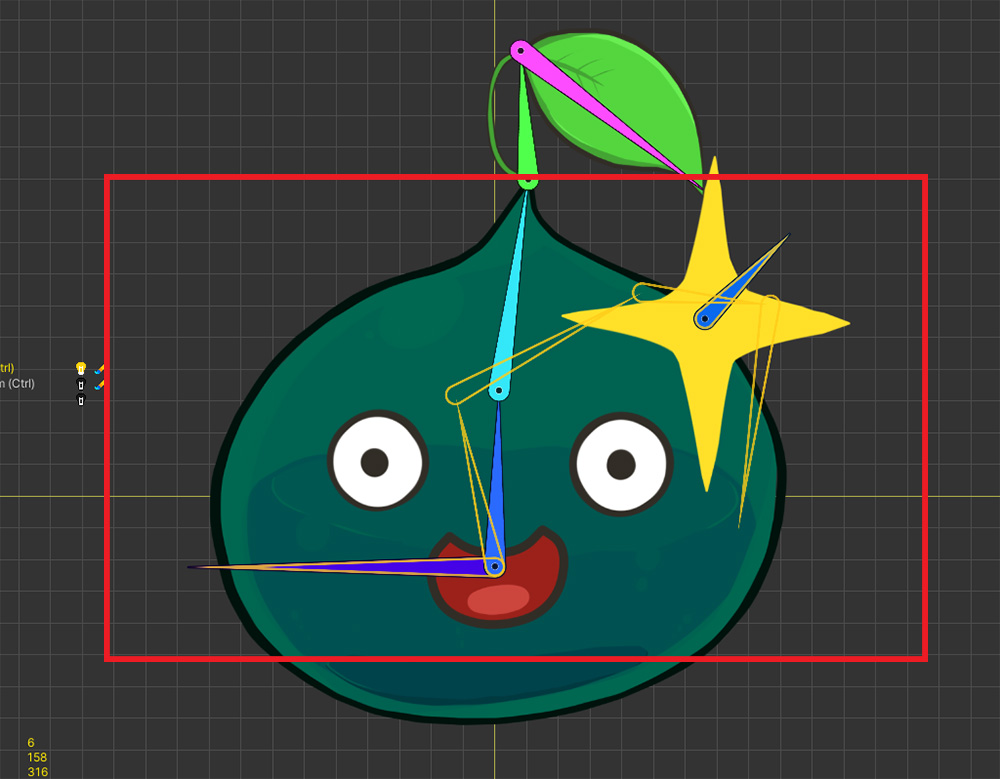 With a modifier selected other than the Transform (Controller) modifier, turn on Edit Mode.
The modifier operation result for the bone is displayed in the form of the yellow outline. 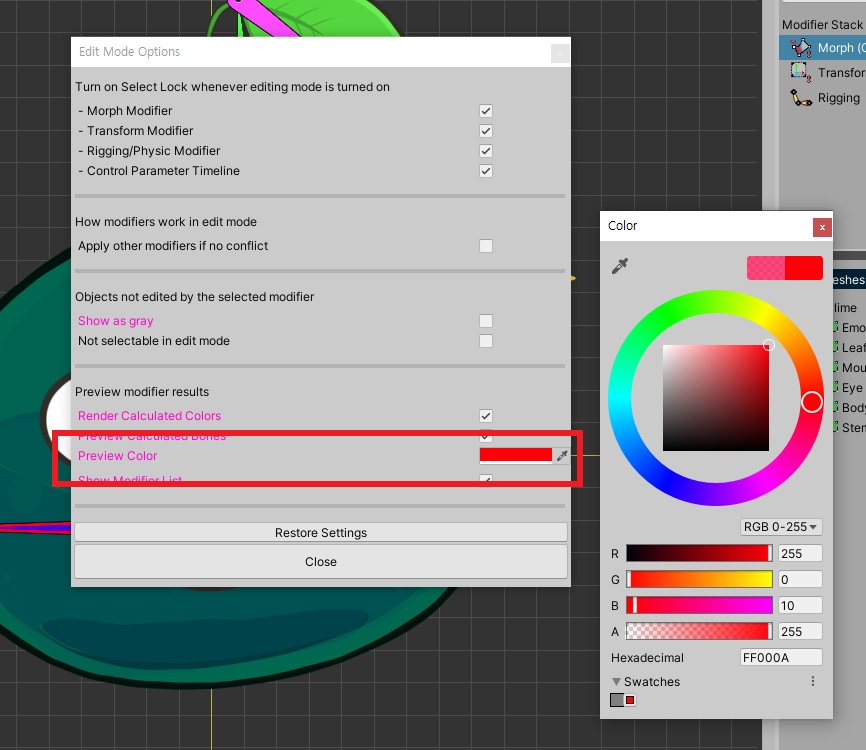 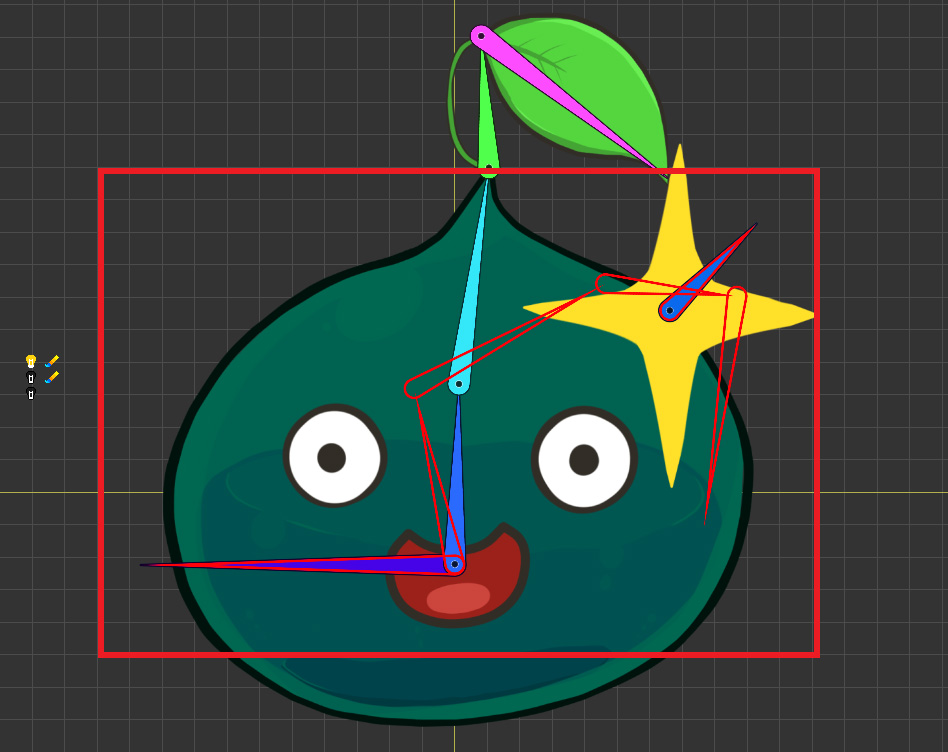 The color can be changed in Edit Mode Option Settings. 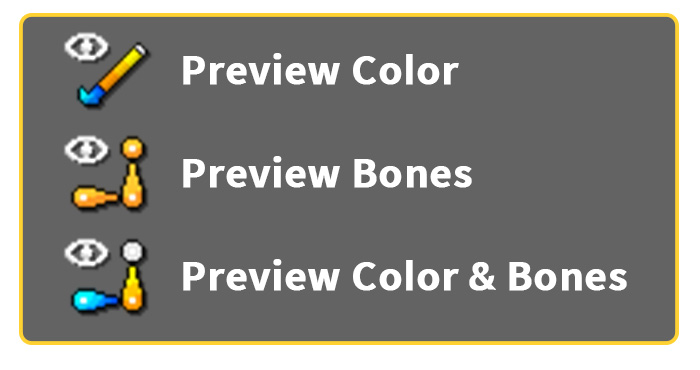