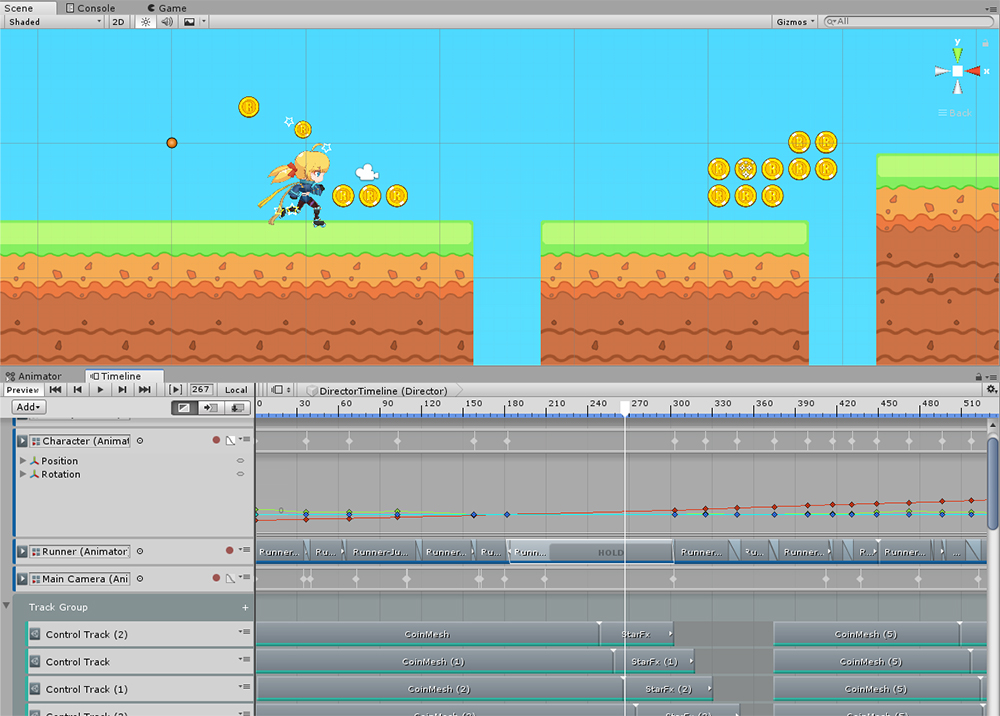 Unity's Timeline is a function that creates a cinematic scene that plays during the game.
You can combine and control animations using sequence tools.
You can find a description of the timeline on the Unity homepage. (Related page)
AnyPortrait supports Unity Timeline from v1.1.6. 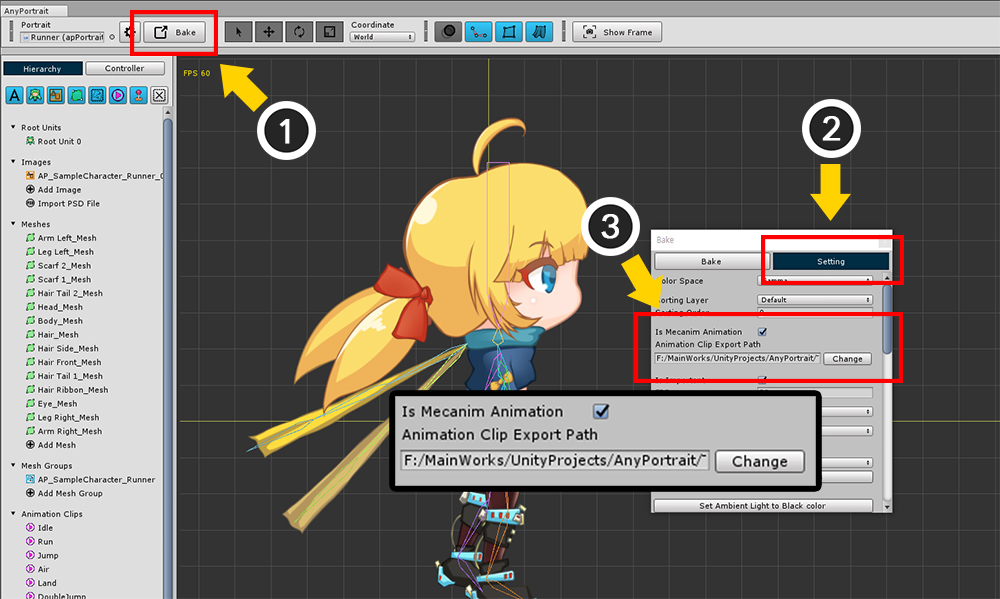 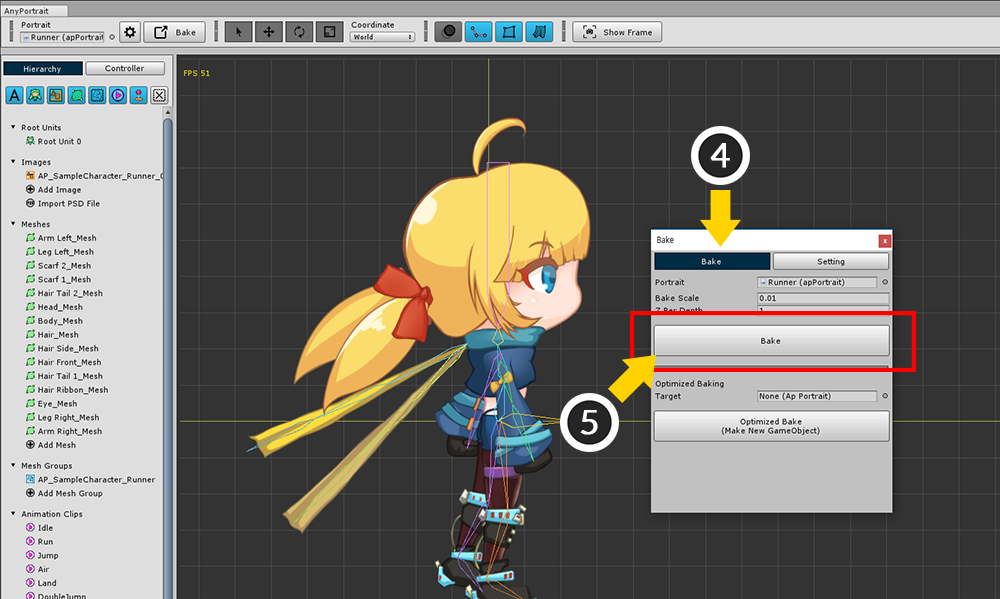 You can see Animator added to the character.
Animation clips are also created.
You can use these animation clips to make Timeline.

Let's create a timeline.
(1) Create a new GameObject. I created it here as "Director".
(2) Add the Playable Director component to the created GameObject. 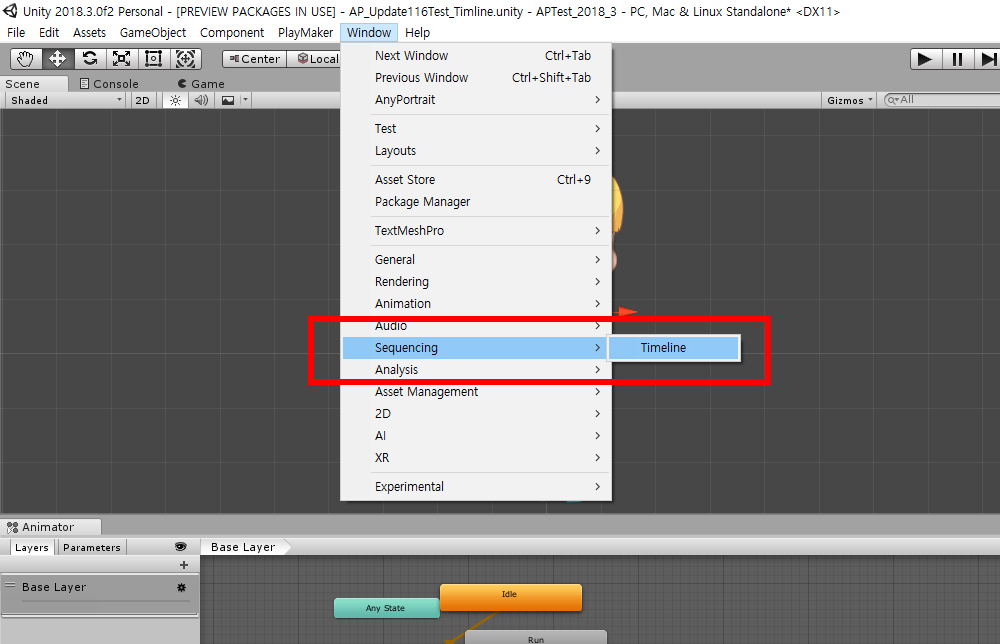 Open the timeline editor with the menu Window > Sequencing > Timeline.
(The menu may differ depending on the Unity version.) 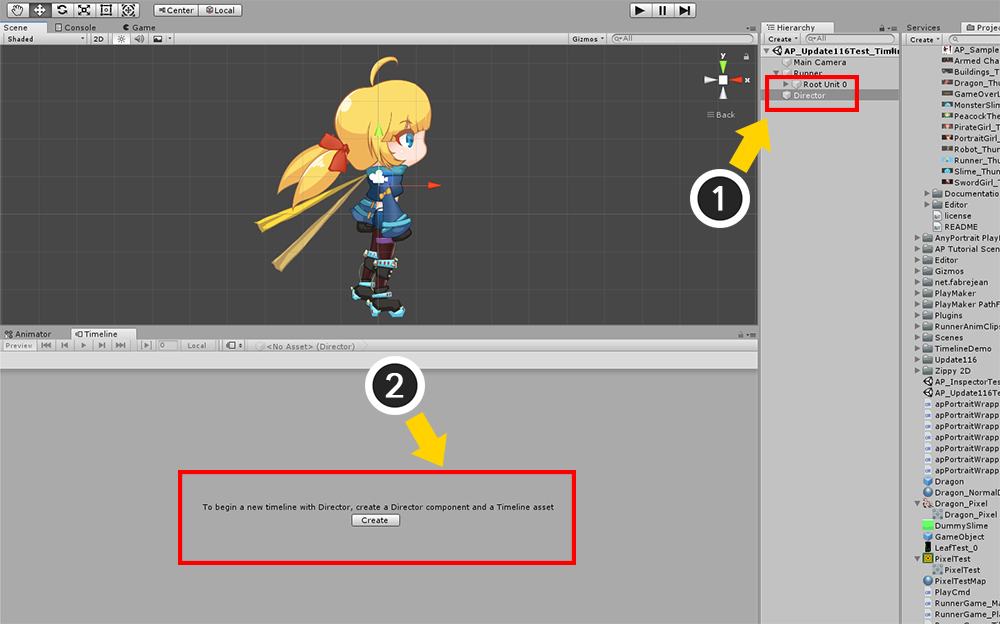 Timeline editor opened.
(1) Select the Director to which the Playable Director component has been added.
(2) In the timeline editor, click the Create button to create a Timeline Asset. 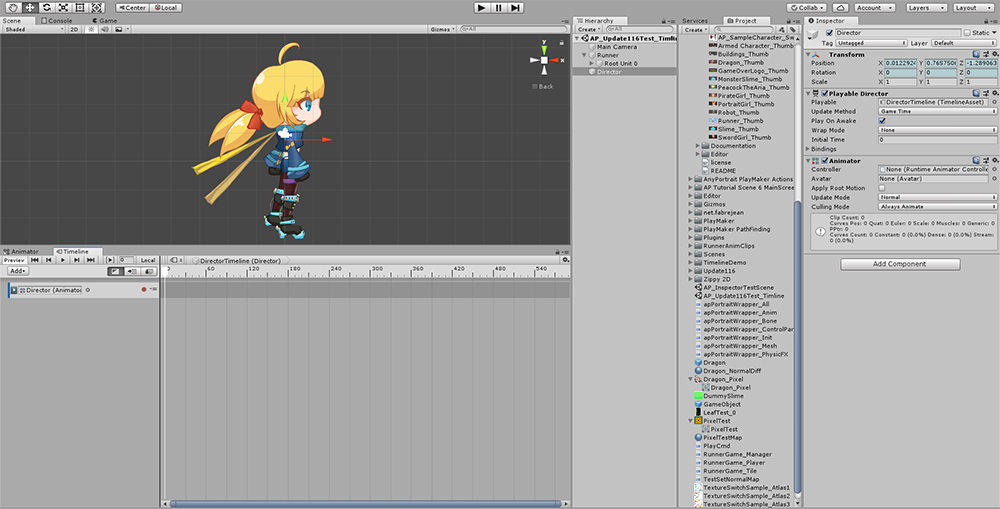 Timeline Asset has been created and is now ready to edit the timeline. 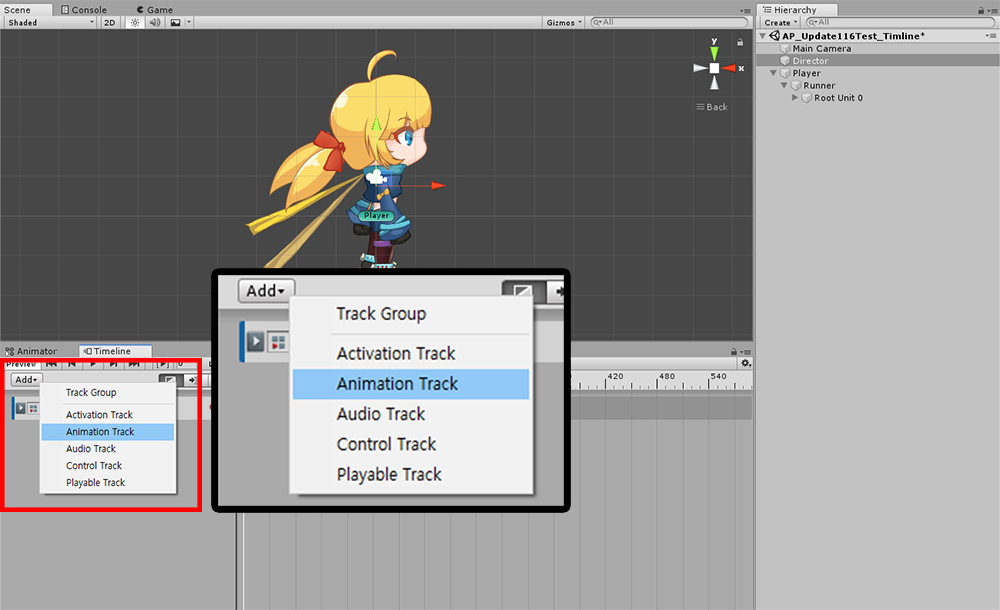 In the timeline editor, press the Add button and add an Animation Track. 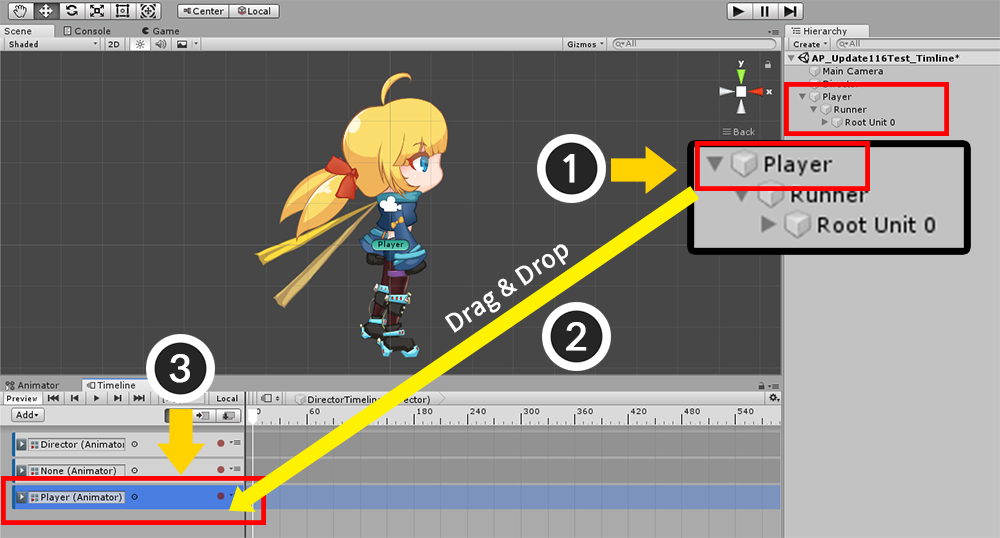 Let's make a track that moves the character.
(1) Drag and drop "Player", the parent GameObject of the character you created, (2) to the track list in the timeline.
(3) A track for Player has been added. 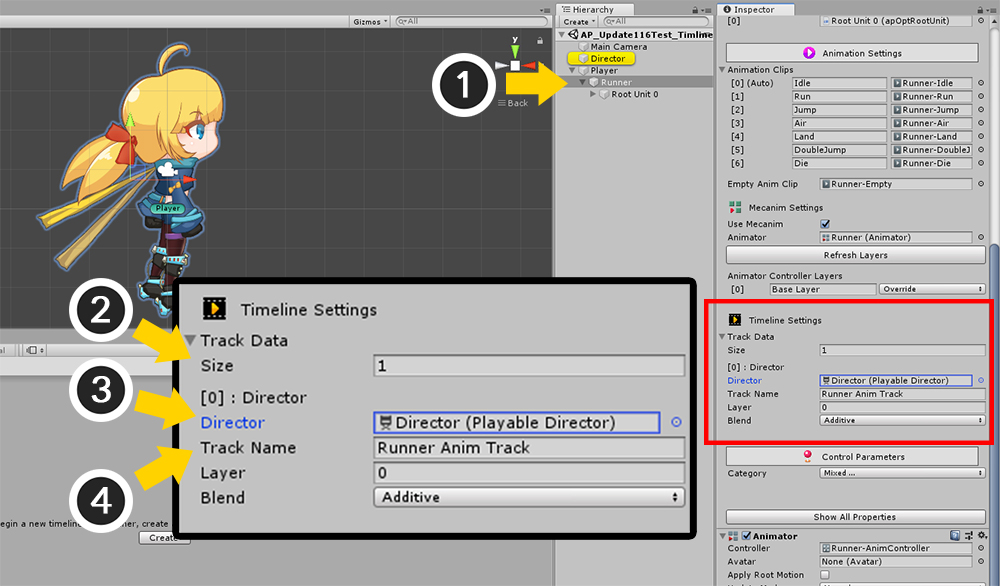 (1) Select AnyPortrait character.
(2) In the Inspector, set the size of Track Data in the Timeline Settings item to 1.
(3) Connect Director with Playable Director to Director Item.
(4) In the Track Name field, type the name ("Runner Anim Track") of the previously created track.

About setting tracks in the timeline


You can interact with tracks in the timeline in the Inspector, with the following features:
1) Multiple layers
Linking two or more tracks to the same Playable Director is the same as creating multiple animation layers.
You can set the blending order and method for multiple layers by changing the values of Layer and Blend.

3) Adding or Removing Track Data with a Script
You can use scripts to connect with Playable Director while the game is running.
Please use the following functions provided since v1.1.6.
(Please refer to related page for detailed explanation.)

public bool AddTimelineTrack( UnityEngine.Playables.PlayableDirector playableDirector, string trackName, int layer, apAnimPlayUnit.BLEND_METHOD blendMethod)
: Connect to a track in Playable Director.
Track name and layer information must be entered.
If this is not a valid track, this function returns false.

public void SetTimelineEnable(bool isEnabled)
: Sets whether or not to be controlled by the timeline. 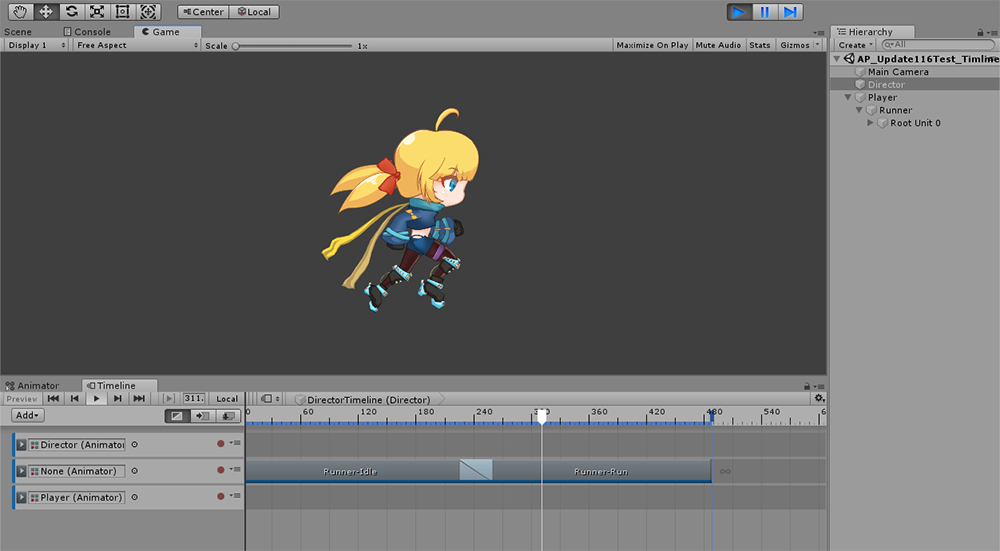 When you play the game, you can see that the timeline is played and the animations of the character are played back in order as well. 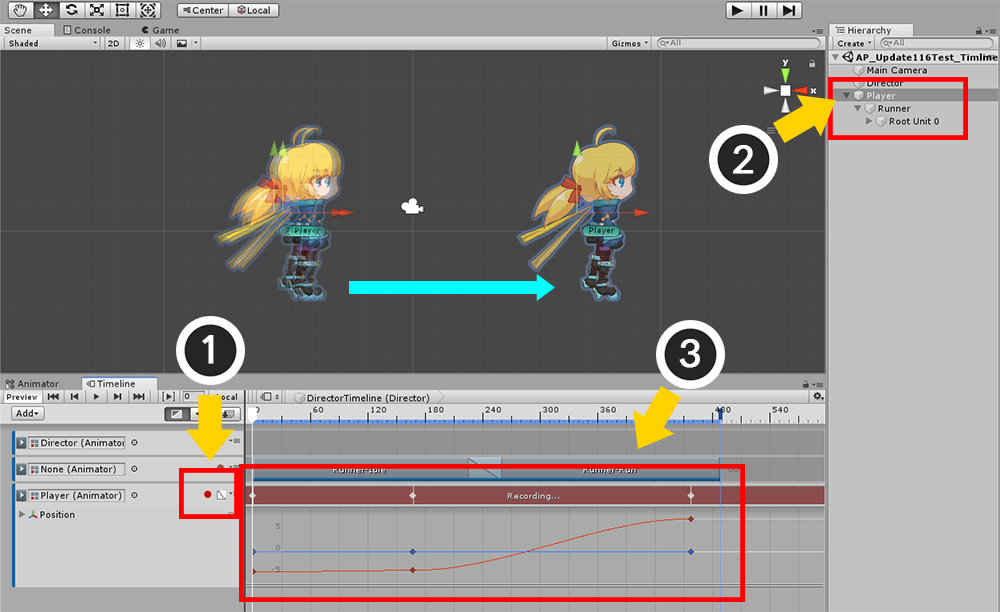 If you really want to move the character, you need to make an animation the other track to which the parent GameObject is registered.
(1) Press the track's record button.
(2) Select "Player" as the parent GameObject.
(3) Create keyframes by moving each position according to the frame. 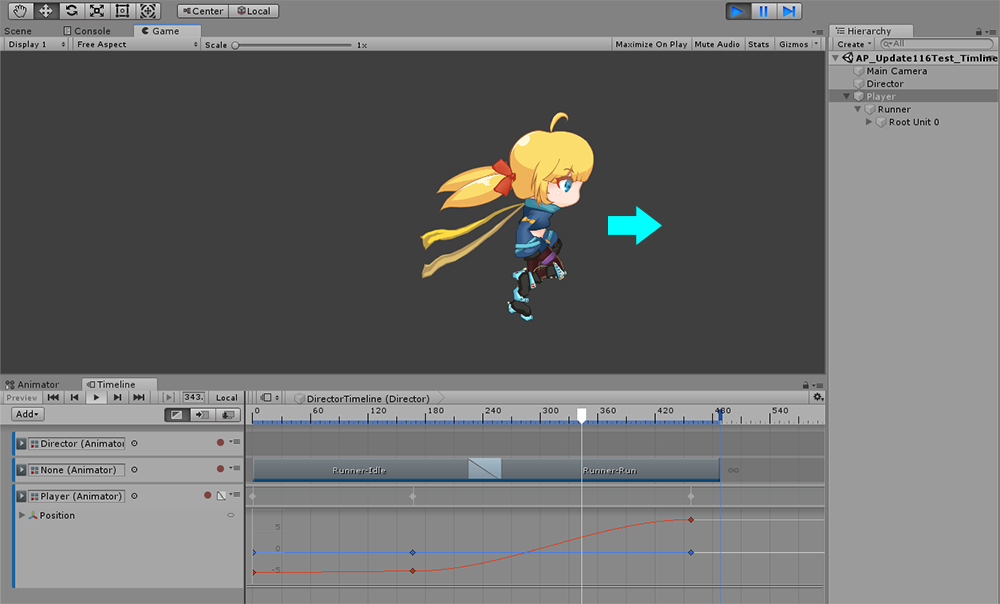 When you run the game again, the animation will run as the character moves forward.

Preview the timeline in the editor


If you have completed this step, you can see that the animation is running along the timeline during the game.
However, if the game is not running, the animation of the character of AnyPortrait will not play even if the timeline is played.
AnyPortrait is not automatically updated in the editor, because the mesh is updated only when there is a input event.
To solve this, another script is provided since v1.1.6 so that it will be played by the timeline even when the game is not running.

The Timeline simulator (apAnimPlayTimelineSimulator) has been added as a component.
(1) Assign the current Playable Director. 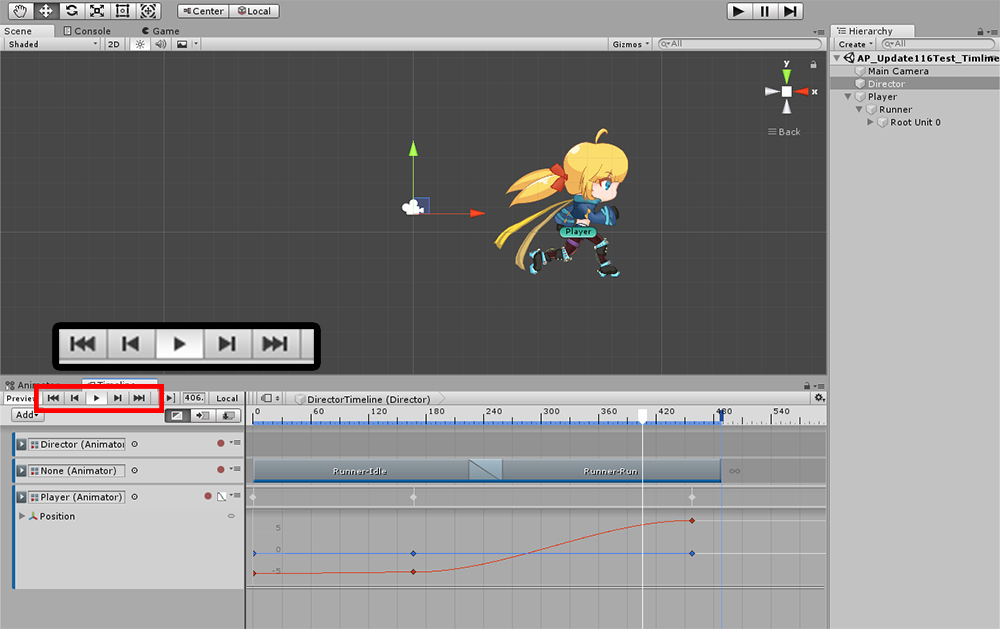 While editing the timeline, you can see that your character's animation is working properly.

Properties and precautions of the timeline simulator
- When Simulate is turned on, animations are played together when the timeline is played, and conversely, when you turn off Simulate, the character is not controlled by the timeline.
- When adding or removing an animation clip, the Refresh Tracks button must be pressed to recognize updated track information normally.
- The Timeline simulator only works during timeline editing and does not work when the game is run.
- When the Timeline is complete, it is recommended to delete the Timeline Simulator component. 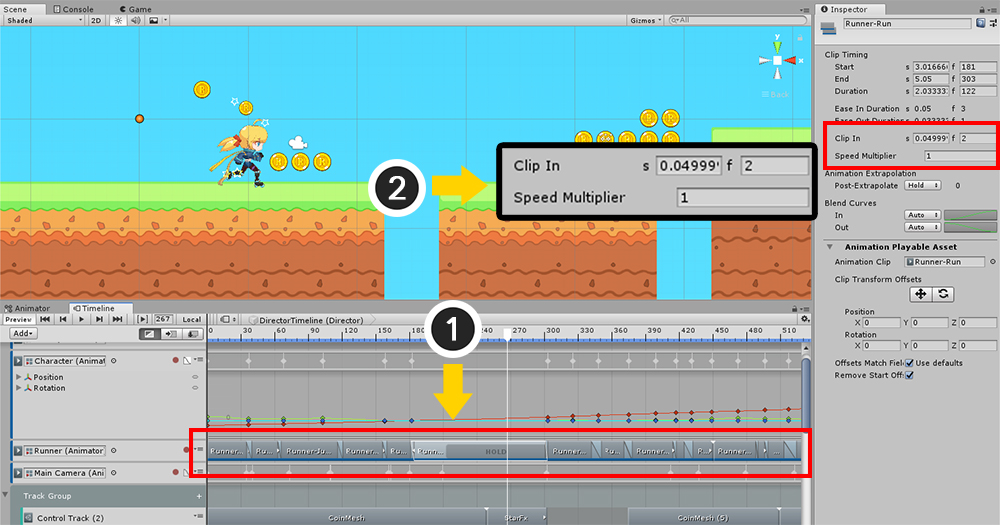